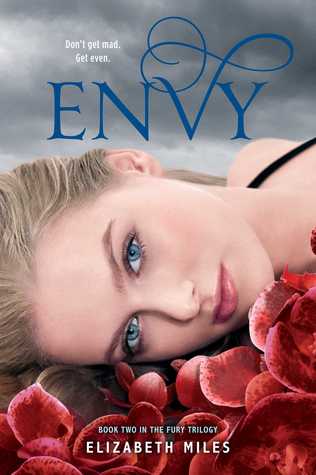 “The Furies make pleasingly vicious villains” (Kirkus Reviews) in this second book of a chilling paranormal trilogy where revenge rules the day—and “sorry” isn’t going to cut it.Spring is coming, and the ice is slowly melting in Ascension…revealing the secrets buried beneath.

Emily Winters knows the Furies have roots in Ascension, Maine—but she’s about to discover that they’re deeper than she ever imagined. With the help of her new friend Drea, she vows to dig them out. But it’s hard to focus when she’s desperate to make up with JD, and to figure out why Crow, a mysterious Ascension High dropout, seems to be shadowing her.

Meanwhile, new girl Skylar McVoy is determined to leave her own dark past behind. So she’s thrilled when popular Gabby takes her under her wing, and the stunning and sophisticated Meg offers to give her a major makeover. But everyone knows what happens to the vainest girl of all…

It’s tempting to be naughty. But beware: the Furies are always watching, and their power grows stronger by the day

I really enjoyed this book so I have no idea why it took me so long to finish it. I like the storyline because it isn’t like anything I’ve ever read. I like the Greek mythology tie in to a “real life” story. I liked the first in the series better, but the end of this one just has me so hooked. I want to buy the last one right now and start it and then finish it soon after just so I know what happens. The end was the best part. Definitely a cliff-hanger.

I really like the characters in this story but Skylar got on my nerves so much. Nobody cares how much you’re in love. Get over it. It’s irritating having every single sentence that comes out of her mouth have to be about how she could get him to like her. Blah blah blah. It’s absolutely pointless. He doesn’t like you he likes your friend, now end of story. Em was much less whiney and much more driven in this book rather than the first. She wanted to know about the Furies so she took it into her own hands and found out. JD made me really sad because I loved that he had Em’s back in the first book but then basically didn’t remember Em in this one. Some of the choices Em made were sometimes questionable, but I still like her as a character.

I would be Skylar so then I could change the dialect of the story and make her not so boy crazy and striving to be the most popular girl in school. Be your own person, don’t pretend to be something you’re not.