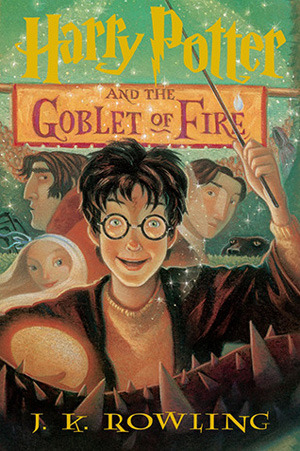 The summer holidays are dragging on and Harry Potter can’t wait for the start of the school year. It is his fourth year at Hogwarts School of Witchcraft and Wizardry, and there are spells to be learnt, potions to be brewed and Divination lessons (sigh) to be attended. Harry is expecting these: however, other quite unexpected events are already on the march…

As I have said at the beginning of every Harry Potter review, I love Harry’s wizarding world. I love absolutely everything about it. The idea for this book was so well thought out and I love that the two other schools come to participate in the Triwizard tournament. I really enjoyed reading about the three tasks that went on for the competetion as well. The first time I read this book it was my favorite of the ones I’d read, but reading it again made me realize that this one is slower than the others. That of course isn’t a bad thing, just an observation. The endings of all the Harry Potter books are my favorite parts. J. K. Rowling wraps everything up so nicely. You find out all the little things that you could have overlooked throughout the story. The plot ties itself together very nicely at the end.

I love all these characters, just as I have since book number one. Krum and Fleur irritated me at the beginning because they acted so cocky and stuck up. I think one of the reasons they irritated me was because I know I’ve read this book, but I didn’t remember how they turned out. By the end of the book I really enjoyed Fleur. She really is a sweet girl and my favorite parts with her were when Ron blurted at her and asked her if she wanted to go to the ball with her and when Harry saved her younger sister from the depths of the lake in front of Hogwarts and she kissed both Ron and Harry on the cheeks. When I imagine her, I imagine a beautiful, skinny, tiny girl with white blonde hair. The movie portrayal of her is was perfect. Krum still ended up irritating me by the end because I wanted to hurt him when I thought he was doing one of the ‘Unforgivable Curses’ on Cedric during the competition.

I would be Fleur in this Harry Potter because I would love to take her place and see everything from her perspective. I would want to know what she thought of Hogwarts and what her original responses were to getting her name drawn from the Goblet of Fire. I would love to have that accent as well, because why not? If I could, I definitely would.