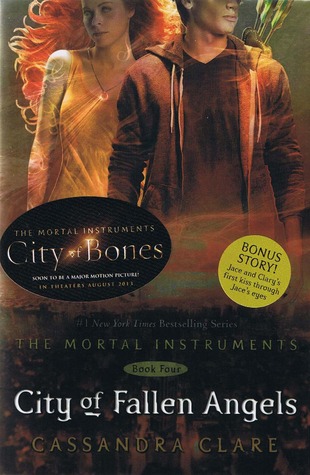 The Mortal War is over, and sixteen-year-old Clary Fray is back home in New York, excited about all the possibilities before her. She’s training to become a Shadowhunter and to use her unique power. Her mother is getting married to the love of her life. Downworlders and Shadowhunters are at peace at last. And—most importantly of all—she can finally call Jace her boyfriend.

But nothing comes without a price.

Someone is murdering Shadowhunters, provoking tensions between Downworlders and Shadowhunters that could lead to a second, bloody war. Clary’s best friend, Simon, can’t help her—his mother just found out that he’s a vampire, and now he’s homeless. When Jace begins to pull away from her without explaining why, Clary is forced to delve into the heart of a mystery whose solution reveals her worst nightmare: she herself has set in motion a terrible chain of events that could lead to her losing everything she loves. Even Jace.

The stakes are higher than ever in the #1 New York Times bestselling fourth installment of the Mortal Instruments series.

Clary is madly in love with Jace, even more so than she was, but Jace is completely ignoring her. She doesn’t know why, but he’s just acting weird and distant towards her. Simon is in a tough place stuck on two beautiful girls at once. He tries to deny the fact that he’s a vampire by skipping meals of blood, then gets put into a horrible life changing situation. Maia finds an old friend. Alec is bothered by how old Magnus is. Jocelyn and Luke are finally getting married. Everything seems in order until a certain vampire gets creepy blackmail messages. Is anyone safe? What’s going on with Jace? Why is he ignoring Clary? Some new answers are revealed to past problems, but some new problems are faced. This is honestly one of my least favorites in the Mortal Instruments series. I love Jace as a character and this book is more centered around Clary and Simon rather than Jace. A lot of the humor was lost with the less of Jace in the story. I still love this book, but it got really slow because I knew what was going to happen. I cannot wait to read City of Heavenly Fire, though!

Again, Jace is my favorite, but I honestly loved Isabelle in this one. She showed a vulnerability she hadn’t showed before. She’s finally admitted that she’s in love. That’s a huge deal for her. She was raised always knowing that giving y0our heart away was a foolish thing to do. She believed that hearts are too easily broken, but her shell was finally cracked and it was much easier to relate to her because of it.

Obviously I would choose Isabelle. I just said above all the reasons I loved her and related to her. Again though, I loved her vulnerability in this book and I loved how brave she was with everything. She’s always brave, but she had a different feel to her this time. The story focused more on her than on just Jace and Clary and you realized that she isn’t just a beautiful girl who doesn’t want to fall in love.