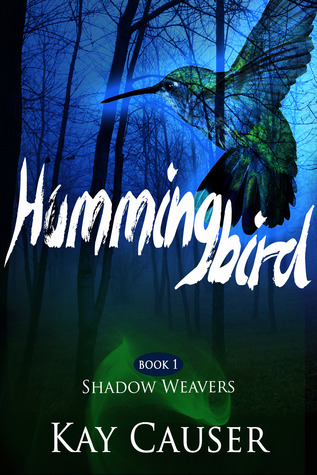 The shadows are moving…

For fifty years the gateways to the dark places have been closed. No dark spirits have escaped and no shadow weavers have been called upon to fight them. But things are changing.

Naomi keeps seeing a hummingbird in her dreams but she has no idea what it means. She also doesn’t know who the mysterious boy is that seems to be able to turn invisible, or why the Korean exchange student, Minhyun, is suddenly showing her so much interest. Worst of all, she doesn’t know what is lurking in the darkness, waiting for her.

But she is about to find out.

She is the first shadow weaver in fifty years…

Naomi lives with her dad and her cat in California. She goes to a party with her friends one night and meets the new foreign exchange student from Korea, Minhyun. She goes shopping before the party with her friends at a small jewelry shop on the coast, and finds a necklace with a hummingbird charm on it. She decides to buy it, then at the party Minhyun asks about it saying he likes it. She walks home from the party in the dark, and suddenly feels the hummingbird charm vibrate. She has no idea why until a Shadow comes up behind her and attacks her. A boy named Jesse comes and fights the Shadow and kills it. He introduces himself and agrees to answer her questions the next day. He finds her the next day and she asks her questions and he explains to her that she is the newest Shadow Weaver in five decades. She asks even more questions and he tells her that his grandfather has been training him to hunt these Shadows. Why was she chosen as the next Shadow Weaver? Why has Jesse been training? I was contacted by Kay Causer to read this book. I didn’t hate this book, but some things definitely bothered me. There wasn’t much development with characters. I thought it was laughable and somewhat awkward when Naomi and Jesse first kissed. It was really random timing, and she had been training for literally weeks before she killed her first Shadow. But overall this book wasn’t bad, just not really my thing. I’m glad I got the opportunity to read this though. I’m excited to see what happens in the next book.

Naomi was our main character and her love interest/other main character was Jesse. Jesse was my favorite character, but it was ridiculous that Naomi’s dad said it would be okay for him to go on vacation with Naomi. Like what? That would totally not happen. Her dad JUST met him. Even if Jesse was the nicest guy on the entire planet, no dad in their right mind would let his daughter go on a trip with a boy both she and he had just met.

I would definitely choose to be Jesse because he was my favorite character. I didn’t really like Naomi, but Jesse was pretty cool. He trained to be a Shadow Guide his whole life. He’s been hunting Shadows for almost forever, and he lives with his super cool grandma and grandpa. His grandpa owns the jewelry store, and both his grandparents are super nice. Again, I wouldn’t want to be Naomi because it would first of all be a lot to take in that you can now see the Shadow World, but that you’re a huge part of it. That would be so scary. And I would be a total wimp when it came to fighting. I mean come on, really if someone had just cut me with a sword I would start balling my eyes out. I get a little teary when I get a paper cut. Okay, maybe not teary, but I do feel the pain. I mean honestly I would probably die the first time I went out hunting.