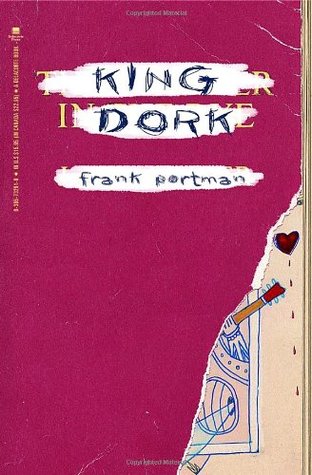 As John Green, New York Times bestselling author of The Fault in Our Stars said, “King Dork will rock your world.” The cult classic from Frank Portman, aka Dr. Frank of the Mr. T. Experience, is a book like nothing ever done before–King Dork literally has something for everyone: At least a half-dozen mysteries, love, mistaken identity, girls, monks, books, blood, bubblegum, and rock and roll. This book is based on music–a passion most kids have–and it has original (hilarious) songs and song lyrics throughout.
When Tom Henderson finds his deceased father’s copy of J. D. Salinger’s The Catcher in the Rye, his world is turned upside down. Suddenly high school gets more complicated: Tom (aka King Dork) is in the middle of at least half a dozen mysteries involving dead people, naked people, fake people, a secret code, girls, and rock and roll. As he goes through sophomore year, he finds clues that may very well solve the puzzle of his father’s death and—oddly—reveal the secret to attracting semi-hot girls (the secret might be being in a band, if he can find a drummer who can count to four.
A brilliant story, King Dork includes a glossary and a bandography. And look for King Dork Approximately, the sequel to King Dork, available in winter 2014.

Tom Henderson is the main character of this book, and he is the epitome of a dork. Tom is a misfit going to school in a mean town where almost everyone gets picked on in some way. His teachers suck and the AP classes are a joke, but one thing everyone has in common in this small town? The love of the book The Catcher in the Rye. Most school assignments revolve around this book in some way and is one of the only required school supplies. Tom and his best friend, Sam Hellerman, are in a band. The band is great at coming up with new names for themselves and their albums, but seem to lack the whole instrumental talent piece. Tom, also known as Chi-Mo, finds a box of books his deceased father read when he was Tom’s age. He decides to make his way through all of them in order to become closer with his dead father, but he get’s caught up. What does he get caught up on, you may ask? Notes and doodles in the margins, loose pages of coded messages, and funeral pamphlet. Hmm. Seems to be an interesting mix of things. On top of finding out all these mysteries dealing with his dad, Tom has some girl issues. Tom Henderson, King of the Dorks, meets a mystery girl at a party and the two start kissing. Kissing and kissing and kissing some more. Things escalate in Tom’s life and he ends up being stumped by two semi-hot girls, a mystery involving the death of his father, and an evil principal with some secrets of his own. I enjoyed this book so much; I read it with some friends for book club and ended up loving it. It is such a funny read about being in a band and high school in general. There were some interesting things going on in this book that no one in high school should experience, honestly. All-in-all if you’re looking for a hilarious story, pick up this book.

Tom’s family was a bunch of randomness squished all into one group. Tom’s sister is kind of bi-polar, his mom is crazy, and his step-dad is a hippie. The interaction between this perfectly flawed family is hilarious and awkward all rolled into one perfect mix. Sam Hellerman is also really funny with his conversations with everyone. He also has the power to will himself to have a bloody nose.

I would definitely choose Tom in this case. He’s so funny and awkward, but he is also really curious. In a lot of books the characters lose their curiosity in simple things. All high school kids wonder why stupid things are the way that they are and some books lose that. It really did capture a high school student.