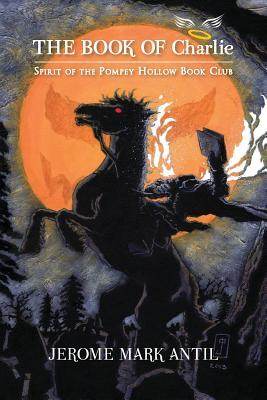 Title: The Book of Charlie

It’s a coming of age story beginning with a summer vacation, climaxing on a full moonlit Halloween night. They’re teens now – and their club president, Mary Crane, decides to follow her teacher’s suggestion of getting a Pen Pal for the summer. She writes to a boy her mother had read about in the newspaper – a Pennsylvania lad. He writes back. As the summer unfolds one of the teens is witness to a crime in progress. Innocently the young Pen Pal to the club’s president unwittingly helps them not only solve the mystery of just who the crooks are but they also solve what turns out to be an unresolved military mystery dating back to the War and still lingering in the shadows of the D-Day invasion. Was it coincidence that Mary’s Pen Pal just happens to be a grandson of the president of the United States? It’s more than a Halloween story, it’s a history book. It might be to today’s chronicles of the past what Adventures of Huckleberry Finn was in 1884. With a backdrop of rural life and times as they were in 1953 this novel reawakens our faded memory and colorfully illustrates two vanishing landmarks, both epics of an American culture and world history. The family farm for one and sad as it may be, the fleeting memories of the pivotal D-Day Invasion under Supreme Commander General Dwight David Eisenhower – the other. Without either we could have lost the War. This novel brings them both back to life in absorbing detail – it’s a fable with a solid footing of the times for the tale’s lasting cultural relevance. It all happened amidst five country towns, a few villages and hamlets where more than sixty five family farms were busy raising children, apples, corn, and wheat, and – all told – milking about 3,200 cows.

This book starts out by introducing Charlie. Charlie is the farmer who was best friends with Jerry in the previous book. Charlie is an angel in this book and tells the story through his perspective. Jerry gets a job at a hotel and smashes bottles and wet mops the floors with scalding hot water. He brings the crushed bottles up on an elevator to an alley behind the hotel. He brings the glass up and sees a young boy. He tries to talk to the boy for many days, even gives him some food, and finally the boy responds to Jerry. Jerry asks him his name; the boy says Bobby. Bobby tells Jerry that his dad is in jail and his mother is dead. Bobby ran away from an orphanage and is hiding until his dad gets out of jail. Jerry comes up with a plan to take the boy and keep him safe. Jerry has his older brother pick him and Bobby up from the hotel. They go to Jerry’s house and Bobby gets settled. Jerry and his best friend, Holbrook, see some sketchy men smoking under a bridge. The team of two try and come up with a plan to catch the crooks who they had witnessed stealing items from around the area. Will the catch the crooks? What happens with Bobby? I got this book for review from Jerome Mark Antil. Huge thank you to him :) Anyway, the writing tense was so odd in this book because the perspective changed from person to person without warning. It switched between Charlie, Jerry, and Dick, Jerry’s older brother. It was distracting. I liked the story line after I got into it, but it just took me a really long time to read.

I would be Mary just like from TPHBC. She’s so sweet and such a well rounded character. She has a pen-pal, I have a pen-pal. She likes to read, I like to read. We have a lot in common and are very similar. She’s one of my favorite characters from the book.

*Huge thank you to Jerome Mark Antil! I really enjoyed having the opportunity to read your book!*

1 thought on “Review: The Book of Charlie – Jerome Mark Antil”