Take Me Tomorrow – Shannon A. Thompson 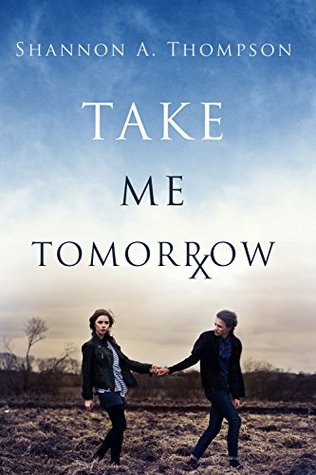 Two years after the massacre, the State enforces stricter rules and harsher punishments on anyone rumored to support tomo – the clairvoyant drug that caused a regional uprising.
But sixteen-year-old Sophia Gray has other problems.
Between her father’s illegal forgery and her friend’s troubling history, the last thing Sophia needs is an unexpected encounter with a boy.
He’s wild, determined, and one step ahead of her. But when his involvement with tomo threatens her friends and family, Sophia has to make a decision: fight for a future she cannot see or sacrifice her loved ones to the world of tomorrow.

Sophia Gray is just a normal girl with a delinquent best friend named Broden. The two are friends with the neighborhood twins named Miles and Lily. Sophia finds out Broden is in trouble again but he doesn’t tell her what for. He brings Sophia with him to meet a boy named Noah. She doesn’t know why they have to meet the mystery boy in the middle of the night, but she goes along with it. She finds out that this boy is the boy that stopped her while she was patrolling the forest behind her house earlier that day. Noah and Broden talk about a drug called Tomo, which is highly illegal. Broden is in the hospital shortly after the encounter with Noah and she suspects that he is the one who beat him up. She goes to see Broden in the hospital and sees his glassy, foggy eyes and realizes that he takes Tomo. Tomo lets you see parts of the future, but Sophia is scared and doesn’t know why Broden is taking the illegal drug. Her suspicions about the mystery boy are proved to be true and she learns that Noah and Broden are running. Running from what? Why are they in trouble? I got this book sent to me by Shannon A. Thompson for review. I have decided that Thompson is one of my favorite authors. Her writing style is so beautiful and keeps you wondering the whole time. There was never a boring or dull moment in this book and I’m so glad that I got the opportunity to read it. I loved the premise of this book; it was very intriguing. It was something I had never heard of before and I was glad to see something brand new.

The main character of this book was named Sophia and she was brought into the region illegally by her father. She was a good, strong main character, but of everyone in this book, Noah was my favorite. He was different from everyone, but in all honesty, I was rooting for Broden and Sophia to be together. Most definitely a ship. Sophden? Brodia? Either works ;)

I think I would choose to be Noah, just because he was my favorite. I’m not saying I want to be addicted to a drug, but he was a strong character who cared about his family and friends. The ending made me really sad and I want to know what happens next! pst. Shannon, I would really enjoy a sequel ;)

3 thoughts on “Review: Take Me Tomorrow – Shannon A. Thompson”