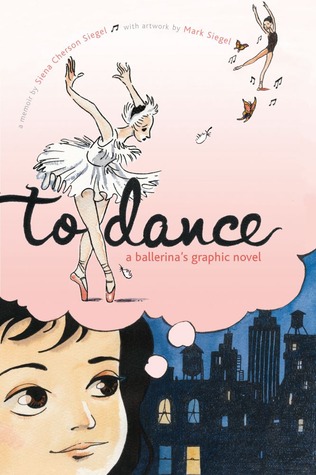 Dancers are young when they first dream of dance. Siena was six — and her dreams kept skipping and leaping, circling and spinning, from airy runs along a beach near her home in Puerto Rico, to dance class in Boston, to her debut performance on stage with the New York City Ballet.
Twirl along with Siena as she shares her story in words with pictures by acclaimed illustrator Mark Siegel.

Little Siena Cherson Siegel, at age six, decides to go to dance classes after her doctor told her there was no cure for flat feet. Her mother thought they would give it a try anyway. She started taking dance and gymnastics, but later took ballet classes at age nine. Her teacher, at the time, told their whole ballet class that Bolshoi Ballet was coming to their town and that they should all go and see it. She went with her family and saw Maya Plisetskaya dance The Dying Swan. From that moment on, she decided she wanted to be a ballerina. The family moved again, but she got to perform in her first ballet, The Nutcracker. During the summer she went to American Ballet Theatre (ABT) and danced during the summer intensive there. She decided to audition for School of American Ballet (SAB) and went through the audition with the wonderful Madame Tumkovsky. She got accepted into the program, then took classes a couple times a week after school in Lincoln Center. She danced there and took intense classes with girls her age. She got her first pair of pointe shoes, and her journey begins. She gets to work with Mister George Balanchine and other great teachers like: Suki Schorer, Stanley Williams, and Alexandra Danilova. Siena immerses herself into the ballet world, and loves every minute of it. I liked this book so much more than I thought I would. It’s the first graphic novel I’ve ever read, and I’m glad I chose this one. I related to so many of the moments in this book, like going to summer intensives, being in The Nutcracker, and watching ballets just for fun. This book was inspiring because she started at the same age I did, and she took classes and went to intensives and made it as far as she wanted to. Some of the parts I marked in this book were just funny or very true. The firs page I marked was the girls stretching against the wall or in frog position and it just made me smile. Number two was where she got her first pointe shoes (which she called toe shoes…one of my biggest pet peeves.)and in the mirror her foot is turned out, but when you look at her it’s tuned in. Physically impossible, but whatever floats your boat. Three was where she was watching The Miami Dolphins play  and she compares them to ballet dancers; I thought that part was adorable. And finally, my favorite part of the whole book was when Suzanne Farrell crossed her arms in front of her during the performance dedicated to Balanchine. That was such a powerful moment. Overall I really enjoyed this graphic novel, but it seemed very choppy. Things weren’t tied together very well, in my opinion. I love dance, and I love learning about dance, so this really was great for me.

Obviously I would choose to be a professional ballerina, but I’ll pick to be Siena. Her dance story was really great,  and I loved when she took her first class with pointe shoes on. She keeps saying, “Ouch! These hurt!” or “Will it always be like this? It feels like my toes are bleeding.” These are the most true statements about pointe shoes; dancers understand.