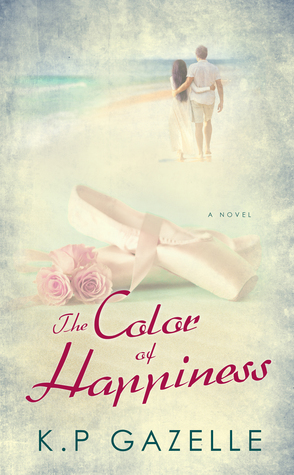 Title: The Color of Happiness

Faith Lane is the girl who has everything. At least, that’s what everyone thinks when they see her rocking a killer dress while laughing with her best friend, Tiffany. But Faith’s life is far from flawless. Her peers torment her relentlessly, and her parents expect her to be the epitome of perfection. Criticized and pressured at school and home, Faith retreats into silent acceptance and finds an escape in her passion of dancing. Then she meets Alex – quirky, forever with a pass, and concealing a mysterious secret of his own. And through his encouragement, Faith starts believing in her gift for dance and gains courage to stand up for herself. But will she be able to keep her footing when the events of one night consume her with the need to jump off the rocky cliffs near her coastal home? And what has pushed her to the edge of reason?

Faith is a very conservative girl who likes to read and dance. Her family is very hard on her and strive for her to be the best in academics, and don’t appreciate when she does other things. She isn’t allowed to go out with friends much because her parents make her stay home and study, but she gets swept off her feet from a boy named Alex. She, of course, doesn’t tell her family about him, so she tells her parents she’s going to hang out with other friends, but she goes and sees him. Alex encourages Faith try out for dance team because she loves to dance. She tries out and makes it, then goes home to break the news to her family. Her parents aren’t thrilled, but they let her stay on the team. Unfortunate accidents happen and cute gifts are given; Faith and Alex are in love.

I had some problems with this book. Alex just stumbled upon Faith when his best friend was making fun of her. I don’t really understand why she would trust him based on his friend choices, but that wasn’t brought up. There are pointe shoes on the cover, but this book is about dance team. Alright. That’s not really how it works. But finally, their relationship moved so extremely quickly. They were calling each other babe right after they started dating. That’s weird. To call each other babe you need to have the right personality. Neither of them did. The also got “really mad” at each other then went right back two seconds later and apologized and kissed. That’s not really how it works. If you’re actually mad, you’ll stay mad for longer than a couple minutes. Despite some of the negatives I had with the book, I still liked it. It got me out of my two-month reading slump, so that’s really nice.

I wasn’t too crazy about the characters, but I’m glad that Faith was really modest. Not too many books talk about high school girls being modest. I’m really proud of Faith that she didn’t give in to the peer pressure of her classmates. It was really weird when she decided to sew nude mesh on her dance team outfit, but it’s whatever.

I would choose to be Faith because I liked what she stood for. She was a good student, she liked dancing, she was modest. All in all she was a really good girl and she picked a pretty cute boyfriend.

*Huge thank you to Radiant Books for asking me to read this! I would love to read anything else from you in the future!*

2 thoughts on “Review: The Color of Happiness – K. P. Gazelle”