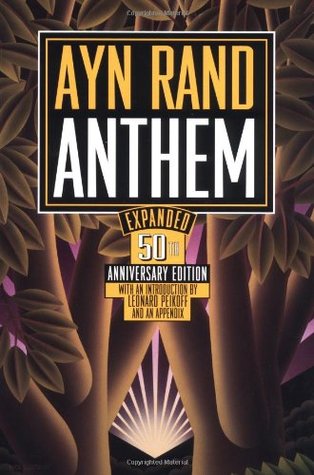 Anthem has long been hailed as one of Ayn Rand’s classic novels, and a clear predecessor to her later masterpieces, The Fountainhead and Atlas Shrugged.

In Anthem, Rand examines a frightening future in which individuals have no name, no independence, and no values. Equality 7-2521 lives in the dark ages of the future where all decisions are made by committee, all people live in collectives, and all traces of individualism have been wiped out. Despite such a restrictive environment, the spark of individual thought and freedom still burns in him – a passion which he has been taught to call sinful.

In a purely egalitarian world, Equality 7-2521 dares to stand apart from the herd- to think and choose for himself, to discover electricity, and to love the woman of his choice. Now he has been marked for death for committing the ultimate sin.

For school we read this short story; it is dystopian talking about the importance of individuality. Equality is the main character and he’s very smart, but the society doesn’t want his new ideas. They make him a street sweeper rather than a scholar because they know he could come up with ideas to wreak havoc on the carefully balanced society. He finds a tunnel in the city street and goes down there every day for three hours a day. Equality meets Liberty and they immediately realize that they’re different from the rest of the people in their town. In their society they’ve given up individuality, but also modern things. No electricity, no cars, everything is set back in time. The lack of individuality means that Equality calls himself “we,” and calls Liberty “they” when he talks about her. It’s kind of hard to understand, but it makes sense in the end. The reason for this is because in the city they believe that everyone works for the common goal, not for individual goals.

I enjoyed this novella; it was very short and I read it online with my classmates. This is a book that really makes you contemplate life. Everything was set so far back because no one had personality or were individuals in society. This really showed how important it is to be yourself and learn how to not take things for granted.

The only two characters in this story were Equality and Liberty. The two really end up understanding that they are important without living in the extreme society. In the end they read books and it makes me really happy because… I mean… books.

I would probably be Liberty because she’s the girl from the story and she really grows throughout the story. Even though this is only about 100 pages, it’s crazy how much Rand has packed in the character development. I would also like to be the beginning of something new like what she and Equality did.