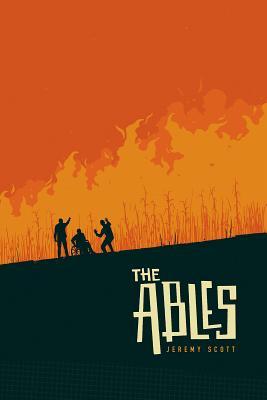 I did have fantastic hearing, mostly by virtue of being blind. But that couldn’t actually mean that he’s trying to tell me I have super powers, right? Because that would be ridiculous

It wasn’t the “sex talk” he expected. Phillip Sallinger’s dad has told him he’s a custodian—a guardian—and his genetically inherited power is telekinesis. He’ll learn to move objects with his mind. Excited to begin superhero high school until he discovers he’s assigned to a “special ed” class for disabled empowered kids, he suddenly feels like an outsider. Bullied, threatened, and betrayed, Phillip struggles, even as he and his friends—calling themselves the Ables—find ways to maximize their powers to overcome their disabilities, and are the first to identify the growing evil threatening humanity. As vital custodians disappear and the custodian leadership is mired in indecision, a mysterious and powerful figure taunts Phillip, and the enemy is poised to strike. But what if the next “one who does all,” the multi-gifted custodian predicted to come, is one of the Ables?

The Ables is a fast-paced, captivating debut novel from Jeremy Scott, a bold new voice in fantasy and sci-fi, and already a widely popular storyteller as co-creator and narrator of CinemaSins, a YouTube channel that has amassed more than 3.8 million subscribers in under two years.

Superheroes are real and there are small towns specifically for them to live and get an education. Philip and his family live in one of these tiny superhero towns. At school everyone has a special power that they can use to, ultimately, help the world. Philip is blind, so he’s in the special education program at school; he becomes friends with the people in his class and they begin to discover new parts of their powers. The school decides to let all the students participate in a simulation of real crime to try and get them ready for the real world; this event is called the SuperSim. Everyone is allowed to participate in the city-wide even except for the kids in the special ed class. Of course Philip and his friends are outraged and decide they need to find a way to participate. They all work together and end up calling their team The Ables after they go through the legal troubles to become a team. They meet a man that they believe is evil and they tell the adults, but of course no one actually believes them. They take matters into their own hands and help the city.

I read this book for book club this month and I thought it was an ehh book. I didn’t dislike it, but it wasn’t great. At page 100 I was thinking I’d have to struggle through the whole book, but by the end it had gotten much better. I had problems with the formatting of this book, to be honest. I didn’t think that the way things were spaced out would mess with the reading experience, but it did. It was really odd to read, actually.

The main character was Philip; his power was telekinesis. All of his friends have powers like super smarts, growing really big, and mind reading, so it was kind of cool to read about that. I liked Philip and all his friends, but my favorite was Bentley. He was the one with super smarts and he was just really funny. He was too smart for his own good and had trouble realizing that other people weren’t as smart as him.

I would choose to be Bentley because of his power. He was really sweet and the problem solver of the group. He was most definitely my favorite from this book.