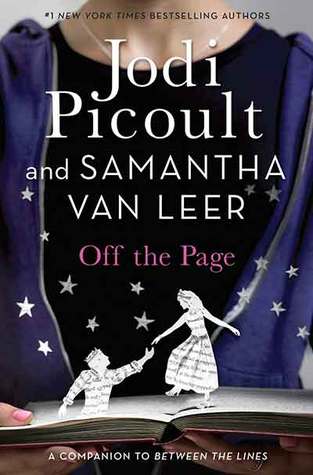 Title: Off the Page (Between the Lines #2)

Meet Oliver, a prince literally taken from the pages of a fairy tale and transported into the real world. Meet Delilah, the girl who wished Oliver into being. It’s a miracle that seems perfect at first. Sure, Oliver doesn’t know that you shouldn’t try to open your locker with a dagger or that there’s no such thing as “the ruler” of the local mall. But he also looks at Delilah as if she’s the only girl in the world—the only girl in any world—and Delilah can’t help feeling that being with him is a dream come to life.

But not every story can have a happy ending. Because the book wants Oliver back. And it will turn both worlds upside down to get him.

Oliver and Delilah will have to decide what—and who—they’re willing to risk for love and what it really means for a fairy tale to come true.

Full of humor and witty commentary about life, OFF THE PAGE is a stand-alone novel as well as the companion to the authors’ #1 bestseller Between the Lines. Fans of Sarah Dessen and Meg Cabot are sure to appreciate this novel about love, romance, and happily-ever-afters.

Oliver is taken out of the pages of Delilah’s favorite fairy tale. She’s been in love with the prince ever since he spoke to her through the pages of the book after she checked it out from the school library. Edgar, the author’s son, takes Oliver’s place, but then things start changing around in the book because the story wants to be original. Oliver and Delilah are the perfect couple and everything is going really well until Edgar’s mom falls ill. Wishes happen and all of the sudden Jules, Delilah’s best friend, switches places with the princess from the story. Edgar and Jules start to fall for each other, but Delilah wants her best friend back and the princess wants to get back into the fairy tale. How do the best friends deal with their fictional boyfriends? Is Edgar’s mom going to be okay?

I loved the first book in this series, but this one just kind of fell short in comparison. Yes her fictional boyfriend was out of the book. but like every single relationship, there were bumps along the way. They just expected everything to be perfect. Ugh at people sometimes. Anyway, they got so mad at each other and then literally didn’t talk at all. The key to a good relationship is communication. Talk about what is making you angry and get it sorted out. Simple as that. Why would you get mad at a boy who has never ever been out in the real world? He doesn’t know any better! It was really irritating because Delilah just expected Oliver to be good at being in high school. Obviously wasn’t going to happen.

My favorite characters were Jules and Edgar. Jules has bright blue hair and is punk/grungey style; she doesn’t get along with a lot of people, so it makes the fact that her and Edgar became a thing so much more adorable. To be perfectly honest, my least favorites were Oliver and Delilah. They were so irritating and there was so much PDA and declarations of love. Please stop. That doesn’t really happen as often as they made it seem.

I would definitely choose Jules for this one. She was so cool and I loved that she was a little rough around the edges. Overall I enjoyed this book, but it wasn’t great. This just fell into the ehh category.

1 thought on “Review: Off the Page (Between the Lines #2) – Jodi Picoult and Samantha van Leer”