Down the Wormhole (Wormhole #1) – Ana Franco 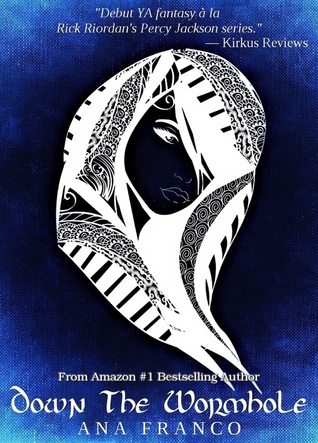 Title: Down the Wormhole

Medusa is a nice girl, Aphrodite is empowering, Loki vanished on thin air, Isis doesn’t have a memory and Anubis is the only sane one. Join them all in an adventure that mixes the styles of ABC’s Once Upon A Time and Rick Riordan’s Percy Jackson. What this can possibly mean? Why, chaos, of course!

Kitty goes to an orphanage for girls and gets a room placement with two girls who are very different from her. She meets them and they’re somewhat standoffish and rude, but she soon finds out their secret. The two girls are two goddesses from ancient mythology. One is Medusa, and one is Aphrodite. Kitty gets a little weirded out because a bunch of gods and goddesses from ancient times show up in the orphanage and the boys orphanage across the street. Kitty falls for one of the boys who just so happens to be Anubis, the Egyptian god of mummification. The group goes on an adventure of sorts in order to regain some semblance of order to their lives.

I was asked by Ana Franco to read and review this book, so thank you Ana! I always love when authors contact me! I do have to say, that I did have quite a few problems with this. There was no real plot line to this story; it was kind of monotonous throughout the book. I enjoyed the concept behind the book, but it was very confusing. I didn’t know who a lot of the characters were, and I got confused as to who was who. I liked that it was somewhat like Percy Jackson, but I think to make it easier to read it could have been one civilization of gods and goddesses. It was hard to differentiate the people throughout this book, but again, the concept was pretty cool!

The main character was Kitty, but I didn’t really connect with her that much. She didn’t have any back story at all, so there was nothing to relate to. The book just opened with her going to live in an orphanage at age 17. It wasn’t said why she didn’t have parents or why she was in the place she was in. She falls in love with Anubis, but other than that there wasn’t much development aside from the fact that she has a couple new experiences by the end.

One problem I have with a lot of books is insta-love. It is one of my biggest pet peeves in reading and watching movies or TV shows, because it’s so unrealistic! There is no way that you could possibly “fall in love” with someone in two days. It’s literally impossible. I also had some issues with Kitty and her boy-toy ALWAYS fighting then making up like nothing happened. They fought about something very important, then on the next page, they were kissing. Um. Alrighty then.

I would choose to be Medusa because she is so powerful. I am currently learning about Greek mythology in my World History class, so this was the perfect time to finish this book! I love Medusa’s character in ancient Greek literature and stories because she has power over everyone. She can turn people to stone just by looking at them, granted it’s technically a curse, but whatever. I think it would be interesting to be a good person like in the story, but be stuck with an awful curse. You’d definitely have to be careful with everything.

Ana, thank you so much for sending me this book! I did enjoy reading it, but I have a couple suggestions. I think that if you explained Kitty’s situation a bit more in the beginning it would have made her more easy to relate to. I also would have a little more development with the relationship of Kitty and Anubis, but the concept is really cool! Thanks again :)

2 thoughts on “Review: Down the Wormhole (Wormhole #1) – Ana Franco”