The Quest for Integrity – Jaswinder 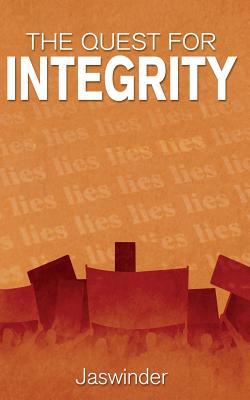 Title: The Quest for Integrity

A novel of ideas in the spirit of Ayn Rand’s “The Fountainhead,” “The Quest for Integrity” pits the heroic Purshottam Gill against the forces of greed plaguing modern society.

As Purshottam diligently works to improve performance and raise morale at the Bank of the Nation’s Amlawar branch, his attempts are hindered by a conspiracy of trade union officials, politicians, and even some of the bank’s senior officers, whose ambitions are threatened.

Among those who align against the reformer is Neki Lal, whose rise from a life of poverty to become a union leader and vicious attack of Purshottam vividly illustrates how success all-too-often comes to be valued above ethics and morality in Indian society.

Another engaging character is Ramesh Trivedi. An ambitious bank officer who owes his allegiance to Lal, Trivedi is tempted into collaboration with powerful Public Party leader Gulshan Kumar. But when his conscience brings a change of heart, the results are shocking.

A riveting tale of power, corruption, and the need for social change, “The Quest for Integrity” is about the confrontation between confusion and clarity, shining a light on the culture of corruption and illuminating a path toward healing this terrible scourge on the human soul.

Purshottam has worked for the National Bank of India for a large part of his life, and he gets promoted. The book talks about his journey through the banking social hierarchy, and the people he’s in the bank with. Purshottam is in search of integrity in the workforce, and eventually finds his way to achieve this.

Taylor from Book Publicity Services contacted me and asked if I would review this book for her and the author. Thank you, Taylor, for sending me a copy of this book! I love when authors contact me and ask me to review books for them :) Anyway, this book really was not for me. I am not very interested in banks or the economic stand point of countries, so this was fairly boring for me to read through. I didn’t understand a lot of it because of my lack of knowledge in this department, so that was partly what I didn’t like. I also didn’t love the writing style. It was hard to understand, but again, that was probably because of my lack of understanding. The book didn’t really go anywhere; it was kind of stagnant throughout the whole book.

Because of my lack of understanding of this book, I couldn’t really connect to the characters. Also, every single one of the names was impossible to pronounce. I didn’t feel for any of the characters, but Purshottam did have some character development throughout the book. He was also very hard to connect to, though. I think that if there were less characters it would have been easier to comprehend.

I would choose to be Purshottam because he was the main character. He was high up in the banking world, so that would be cool to hold power like that. He was the character I enjoyed the most from the book, as well.

Huge thank you to Book Publicity Services and Jaswinder for allowing me to read this book! I hope you all have a great end to your year :)