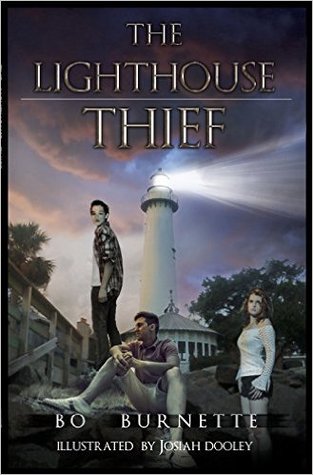 A historic lighthouse. A mysterious thief. An intolerable cousin.

The Fourth of July on Saint Simons Island always brings plenty of excitement. But when 14-year-old Ethan invites his contrary cousin Connor to spend the holiday week, he stumbles upon a little more excitement than he bargained for. As he drags Connor around “his little Island,” Ethan overhears a seemingly malicious plot to vandalize the historic lighthouse. When a mysterious stranger starts stalking him and Connor all over the Island, Ethan is caught up in an unexpected quest to save his beloved lighthouse.

The Lighthouse Thief blends mystery, history, humor, and heart into an exciting story of discovery and friendship.

I got this book sent to me by Bo Burnette himself, so huge thank you for that! Again, I love when I get contacted by authors to read their books; it’s always such a fun process. Anyway, Ethan’s parents leave for a cruise to Alaska, and he stays with his aunt in his house on the Island. His least favorite cousin, Connor, comes to stay the week with them as well, and he’s dreading the “vacation.” When Connor gets there it’s very awkward for the both of them, but they learn to set their differences aside and become close friends. They become so close in a matter of a week because they solve a mystery together; the boys overhear a conversation from two men about stealing something from the lighthouse on the 4th of July. They decide to figure out how to stop them, and end up getting followed by the men. Ethan feels attached to the lighthouse because he’s always grown up around it; he doesn’t want to see something bad happen to it, so the cousins find a way to help out.

I really enjoyed this book! It read like a Nancy Drew book, and it was a fun read. I love middle-grade mystery novels because they’re just so easy to read, and they’re very lighthearted. I think that the main plot of this book was to show the power of friendship. The two boys really didn’t like each other before they actually spent time together, but ended up having a lot of fun together. Being a middle-grade novel, I think that that should be the main focus of the story. I really enjoyed the writing style, and the characters were fun to read about. It was really nice to read a lighthearted book after something that tore at my heartstrings.

Huge thank you to Bo Burnette! I really enjoyed reading your story, and keep writing! You’re young; you have a whole life of books, reading, and writing ahead of you. Good luck!!