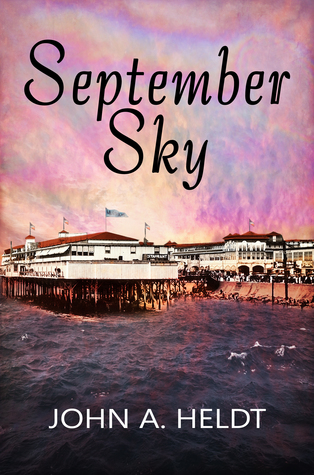 When unemployed San Francisco reporter Chuck Townsend and his college-dropout son, Justin, take a cruise to Mexico in 2016, each hopes to rebuild a relationship after years of estrangement. But they find more than common ground aboard the ship. They meet a mysterious lecturer who touts the possibilities of time travel. Within days, Chuck and Justin find themselves in 1900, riding a train to Texas, intent on preventing a distant uncle from being hanged for a crime he did not commit. Their quick trip to Galveston, however, becomes long and complicated when they wrangle with business rivals and fall for two beautiful librarians on the eve of a hurricane that will destroy the city. Filled with humor, history, romance, and heartbreak, SEPTEMBER SKY follows two directionless souls on the adventure of a lifetime as they try to make peace with the past, find new purpose, and grapple with the knowledge of things to come.

Huge thank you to John A. Heldt for sending me this book!

The first thing I want to say is that if you’re in a book slump, you should pick something up by Mr. Heldt. This book was so fast paced and fun to read. I love the idea of time travel and definitely think it is/it will be possible in the near future, so when John asked me to read this book I was thrilled to! It was so well written and very entertaining throughout the whole book. Chuck and Justin go on a cruise in 2016 and meet a man giving a lecture about time travel. While they’re on the cruise they just think that it could be fun to just listen to him talk, so they go and listen to his lecture. Afterwards, the man hands out cards asking some general questions about how they feel about time traveling. A couple days later, the man calls the guys and asks them to go time traveling and gives them a few options of dates to go to, and they choose 1900. Chuck wants to prevent a distant relative from being hanged for a crime he didn’t commit; they choose to go to a small town in Texas and figure it out.

Of course when they’re there they meet some lovely ladies from 1900. Chuck meets a woman named Charlotte, and Justin finds a girl named Emily. The love stories unfold with the rest of the story, and the plot thickens as time goes on. The reason why they are so at odds is because they have to get back to 2016 by a specific date if they don’t want to be trapped in 1900 forever; they have to figure everything out in a matter of months.

This book was really wonderful and super fun to read. I highly recommend it. It’s $4.99 guys. Go buy it!