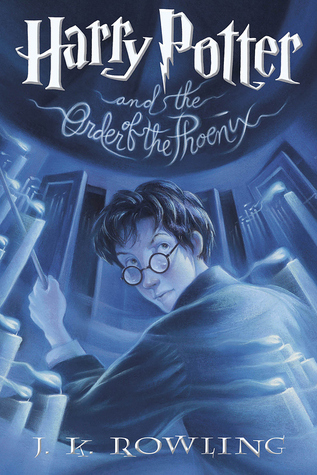 It’s official: the evil Lord Voldemort has returned. His influence is suddenly everywhere in the Wizarding world, and his former allies, the Death Eaters, are returning to his side in droves. In response, the Order of the Phoenix, which worked to stop him during his last rise to power, has reconvened. This time, all of the adults Harry trusts have joined in. And even though Harry is at the center of many of their plans—Voldemort is intent on killing him, after all—they want so badly to protect him that they are keeping him completely out of the loop.

Problems are cropping up at Hogwarts, too, where government officials are meddling in just about everything. And just because Voldemort and the Death Eaters are threatening open warfare does not mean that fifth-year students get out of their exams. Meanwhile, Harry’s powerful connection to Voldemort seems to be growing even stronger, as he realizes that he has direct access to the Dark Lord’s mind. It’s time for Harry and his friends to take drastic action, but the course they choose will have terrible unforeseen consequences.

Truly dangerous times have arrived in the fifth Harry Potter novel, but it never loses the trademark fun, excitement, and wonder at the possibilities of magic.

It’s so much fun being in the Harry Potter world of Hogwarts and wizardry. I have always held a special place in my heart for Harry Potter, and this fifth installment is no different. This is the first book that is actually rather dark. The fourth is still getting to know the characters to a certain extent, and this one finally deals with all the issues in the world Rowling has created.

This book has been my second favorite so far; I think The Chamber of Secrets still holds my first spot as of now. I really loved reading this one because SO much happened! One of the reasons I love the Harry Potter books so much is because they read as a complex movie. They’re easy to understand, but there is depth and reasoning behind all the decisions that are made. This was the first in the series that I was legitimately angry at the book; as in throw it across the room angry. Umbridge made me want to push the book into the Chamber of Secrets. Honestly. Get a grip on your life, Umbridge, and stop being so evil and cold. Ugh.

My favorite part of this book was the friendship dynamic of the Golden Trio. I love watching Hermione, Ron, and Harry interact, so it was really fun. One thing that I didn’t expect to make it a little boring, was the lack of Quidditch. Now, I am not a huge sports fan, but not being able to see the joy that Quidditch gave Harry was a little hard. He loves it so much, and when he didn’t get to play, I could feel for him.

I can’t wait to continue on with this series and finish it out!