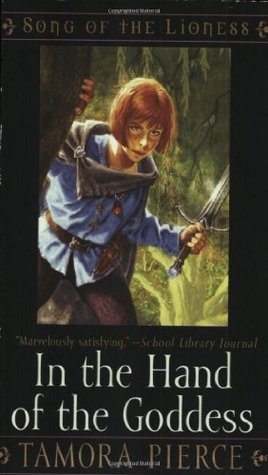 Title: In the Hand of the Goddess (Song of the Lioness #2)

Disguised as a boy, Alanna of Trebond becomes a squire, to none other than the prince of the realm. But Prince Jonathan is much more to Alanna; he is her ally, her best friend, and one of the few who knows that she’s really a girl. Now it will take all of Alanna’s awesome skill, strength, and growing magical powers to protect him from the mysterious evil sorcerer who is bent on his destruction, and hers!

Here continues the story of Alanna, a young woman bound for glory who is willing to fight against enormous odds for what she believes in.

Oh my gosh. You guys. If you’ve never read anything by Tamora Pierce, you HAVE TO. This book was so amazing. I loved reading every single page of it. It has knights, thieves, love, travel, magic. This is the epitome of a perfect book.

Okay, so this is the second book in this series, and only a few people know Alanna’s true gender. She is told by a Goddess to learn to love, but she doesn’t know what that means. She befriends a beautiful cat. She refines the friendships she already has; this is truly a beautiful book.

I don’t want to give too much away, but there is a little bit of a love triangle between Alanna, Jonathan, and George. I don’t know who I like more at the moment because they’re both amazing. I think I’m leaning towards George because Jonathan needs to marry another royal in order to help Tortall, but he loves Alanna. Oh my goodness it’s just too much sometimes. I really love George. He’s precious and mysterious and he loves Alanna so much. I DON’T KNOW WHO TO CHOOSE.

Her brother, Thom, also shows up in this book. I honestly didn’t think he would show up until the next book, so it was nice seeing him introduced into the story again. I don’t know how I feel about him anymore. At the beginning of the first book he wanted to do anything to help and was very humble about his skills, but in this one he’s very arrogant, actually. It made me sad because Alanna didn’t think he would be like that, so she’s a little conflicted. He is staying behind at the castle to help Jonathan, so I’m anxious to see what he’s like in the third book.

If you can’t tell by this gush review, I highly recommend this series. It’s so lighthearted and intense and beautiful and guys. It’s so good. Please read this if you haven’t; just give it a try!

Alanna: The First Adventure (Song of the Lioness #1)