The Last Olympian (Percy Jackson and the Olympians #5) – Rick Riordan 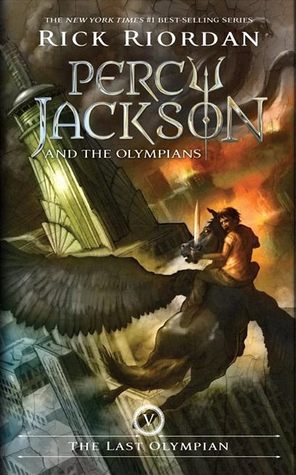 Title: The Last Olympian (Percy Jackson and the Olympians #5)

All year the half-bloods have been preparing for battle against the Titans, knowing the odds are against them. Kronos is stronger than ever, and with every god and half-blood he recruits, his power only grows.

In this momentous final book in the New York Times best-selling series, the prophecy surrounding Percy‘s sixteenth birthday unfolds. And as the battle for Western civilization rages on the streets of Manhattan, Percy faces a terrifying suspicion that he may be fighting against his own fate.

I can’t even explain how glad I am I ended up reading this series. I wish I would have read the books while I was in middle school, but seriously, they are so good. I have loved every single one of the Percy Jackson books, and this is no exception!

Most of this book consists of the final battle that takes place in New York City with the monsters and Kronos vs. the heroes and Demigods. The battle scenes were so epic, and there were so many twists and turns throughout this book. It starts off with Percy and Rachel Dare spending time together *not okay with this since she showed up, but whatever* and then Percy going back to Camp Half-Blood. Everything is different now, though. Grover is off running around with other satyrs, so his best friend is gone. Annabeth is kind of mad at him because he’s spending time with Rachel. And, Kronos has taken over Luke’s body and is trying to kill all the Gods of Olympus. But other than that, everything is great. ;)

Again, most of this book takes place during the battle in NYC, so it had a lot of action and battle. I don’t want to give too much away because this is the last book in the Percy Jackson series, but I would seriously recommend reading all of the books. Even if you don’t love the PJO stories, this last book is worth it.

I loved the Percy and Annabeth scenes; they were soooooooo cute. I think the Percabeth is one of my biggest ships because they are seriously just so perfect for each other. She calls him Seaweed Brain and oh my gosh it’s so cute. I wish there were more scenes with them, but I can’t complain because the ones I had were great.

Two of my favorite scenes from the book:

Percy bathing in the River Styx and being tied to the mortal world because of his love for Annabeth. He loves her friendship, and that’s the only thing that keeps him from drowning and it’s just so flipping cute.

“And it was pretty much the best underwater kiss of all time.” *heart eyes*

Very thankful that I’ve read these books, and can’t wait to find out what happens to the characters in the next series!

PS. Please read these books. I promise they’re worth the hype.

The Sea of Monsters (Percy Jackson and the Olympians #2)

The Battle of the Labyrinth (Percy Jackson and the Olympians #4)