Love Does: Discover a Secretly Incredible Life in an Ordinary World – Bob Goff 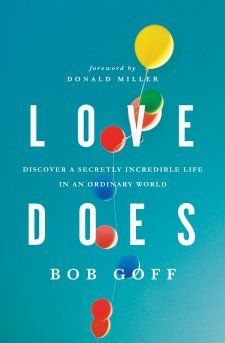 Title: Love Does: Discover a Secretly Incredible Life in an Ordinary World

As a college student he spent 16 days in the Pacific Ocean with five guys and a crate of canned meat. As a father he took his kids on a world tour to eat ice cream with heads of state. He made friends in Uganda, and they liked him so much he became the Ugandan consul. He pursued his wife for three years before she agreed to date him. His grades weren’t good enough to get into law school, so he sat on a bench outside the Dean’s office for seven days until they finally let him enroll.

Bob Goff has become something of a legend, and his friends consider him the world’s best-kept secret. Those same friends have long insisted he write a book. What follows are paradigm shifts, musings, and stories from one of the world’s most delightfully engaging and winsome people. What fuels his impact? Love. But it’s not the kind of love that stops at thoughts and feelings. Bob’s love takes action. Bob believes Love Does.

When Love Does, life gets interesting. Each day turns into a hilarious, whimsical, meaningful chance that makes faith simple and real. Each chapter is a story that forms a book, a life. And this is one life you don’t want to miss.

Light and fun, unique and profound, the lessons drawn from Bob’s life and attitude just might inspire you to be secretly incredible, too.

As being an avid reader goes, people around you want you to read their favorite books, so they loan them to you and you read them. This was what happened to me. I wouldn’t have picked up this book on my own, but one of my friends told me to read this because it’s her favorite book of all time.

I enjoyed this book and loved the messages behind the stories in it. This book was set up as every chapter told a story from Bob’s life, then he related it to how God is the strongest part of anyone’s life. He has the saying that “love does” what other things cannot. Love is the universal language to which everyone can relate, and through his stories he tells about all the times he’s been tested but just remember to love.

I really loved the first couple chapters of this book. My favorite two chapters were near the beginning, actually. My first favorite was about Bob during high school and how he just wanted to leave. So he walks up to his friend’s house and tells him to let everyone know that he had left to go live in the western United States, and the friend just comes along with him. He came with for support for Bob even though they weren’t very close and showed his love and support for his friend. I loved this chapter because it was about a strong friendship. That’s what I find YA books missing. A real and strong friendship. Even though this isn’t YA, I thought that this was refreshing to read about.

My other favorite chapter was about Bob and his wife Maria and their kids. They have three kids, and the parents made a deal with the kids that if they wrote letters to the leaders of the countries of the world to have a meeting and got a ‘yes’ response, that they would go and meet the leader. I thought this was a super cool concept because letters are something I love sending, and the idea that they could possibly travel around the world to just be friends with these leaders was very interesting to me. So the kids get responses of ‘nos’ but got quite a few ‘yeses’. They actually went and visited these political leaders and actually got to know them. The purpose of them going was to become friends with them. I just thought this was a very cool idea. I loved this chapter because they got to travel, and it was all about friendship.

I’ve decided that I just need more friendship books in my life ;) They make me so happy. Anyway, I really liked this book. I loved that this was a Christian book without being too… I don’t know. Preachy, almost. I loved that this was more about Bob’s relationships and how he tied them to God and his beliefs than being a Bible study. Definitely pick up this book if you like self-help/Christian books!