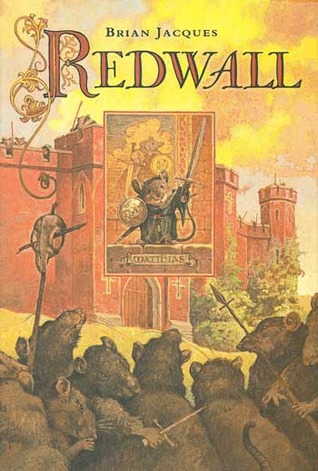 Redwall Abbey, tranquil home to a community of peace-loving mice is threatened by Cluny the Scourge – the evil-one-eyed rat warlord – and his battle-hardened horde of predators. Cluny is certain that Redwall will fall easily to his fearsome army but he hasn’t bargained for the courage and strength of the combined forces of the Redwall mice and their loyal woodland friends. . . . .

The only reason I picked up this book was because I went to a local Little Free Library and found two books of this series. I was intrigued because it was a young adult fantasy series, and fantasy is one of my favorite genres, so naturally I decided to pick them up. I later found out that they were book numbers nine and eleven, so….

I picked up the first book from the library and it was so slow.

This book followed Matthias and his adventures to obtain the great sword of Martin. This was all that happened and I struggled to get through it. I don’t understand how this book has an average rating of 4.1 on Goodreads. IT WAS SO BORING.

I honestly don’t have anything else to say about this. I will not be continuing on with this series.

Also, 22 books in this series. No way is that even possible for me to read that much about small woodland creatures who don’t fight but end up killing the bad guys.