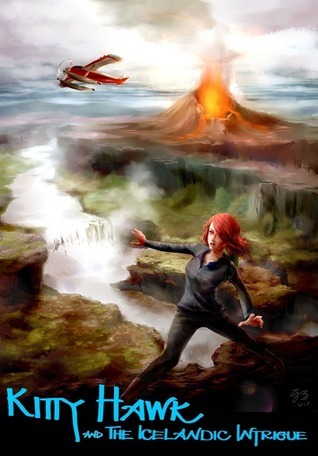 Following in the footsteps of her hero Amelia Earhart, Kitty Hawk sets off on an epic flight around the world and arrives in Iceland’s capital city of Reykjavik where she finds herself immersed in a beautiful alien world of volcanoes, Vikings, elves and trolls. Before she knows it Kitty is plunged head first into an amazing adventure that sweeps her across a rugged landscape where humans and nature exist in side-by-side in an uneasy truce and magical realms seem to lie just out of sight beneath the surface. Kitty Hawk and the Icelandic Intrigue is the dazzling third installment of the Flying Detective Agency series featuring Kitty Hawk, an intrepid teenaged seaplane pilot with boundless curiosity and a knack for getting herself into – and out of – all kinds of precarious situations. This is a perfect book to fire the imaginations of readers of all ages – armchair explorers and amateur detectives alike. From dangerous criminals and corrupt government officials to mystical beings and clashes with the elemental forces of nature, this book has it all. Come and join Kitty Hawk as she experiences the strange and extraordinary world of the Icelanders, and unravels the Icelandic Intrigue.

Huge thank you to Iain Reading for sending me this book! I have enjoyed this series so far and am excited to finish the series!

Kitty Hawk flies to Iceland and encounters strange names, paper airplanes, and a car chase. Kitty finds herself in adventures she didn’t think she would come across, but loves the new experiences.

This is the third book in the Kitty Hawk series, and I took so long to read it! I started it on a trip I took and got about halfway through, then school got very busy and I kind of forgot about it. I finished it on a bus ride to a music event for my school’s concert band on Friday and am getting around to writing the review right now. Overall this book was kind of slow. I take part of the blame for it since I took so long to read it, though.

These books are more companion novels than in a series, because each book chronicles a new adventure in a new place for Kitty Hawk. She takes her bright red plane and flies across the world. It’s quite fun because I love traveling and love adventure books, so it’s a nice change from your typical read.

I enjoyed learning about the naming rules in Iceland. She traveled to Iceland and stayed with friends, and while she was there she learned that in Iceland the child takes the first name of either parent and adds son or daughter to the end, and then that is their last name. There aren’t family names, which I think it quite interesting. I thought it was cool that Iain Reading put this short piece of information in the book, it added a unique twist.

Overall, I think this book series would be good for a younger audience. I would consider this more middle grade. I think I would have liked it a lot more had I read it during early middle school.

Again, thanks to Iain for sending me a copy of this book!