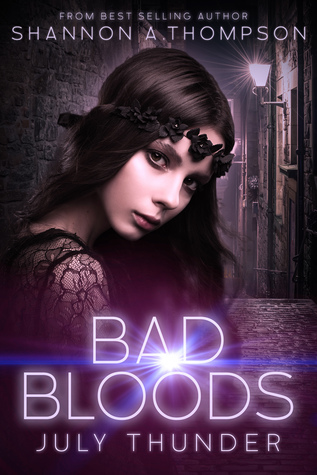 From best-selling author Shannon A. Thompson comes an exciting new duology in the Bad Bloods universe.    Fourteen-year-old Violet has been called many things: a bad blood, a survivor, an immortal…now she has a new name–citizen. But adjusting to a lawful life is not easy, especially when she must live under the rule of the same officers who justified the killings of her flock only eight months earlier.
Segregation of bad bloods and humans is still in effect, and rebellious Violet steps into a school where she is not allowed. When the police get involved, things deteriorate quickly, sparking a new revolution at the wall separating the Highlands from the outskirts.
That’s when Caleb steps in. He might appear to be an average sixteen-year-old bad blood, but he has secrets, and Violet is determined to figure them out. Caleb knows who’s attacking the wall and why, but his true identity remains a mystery–and how he relates to Violet could shake the threatened city to its very core.
Together or not, a storm will form, a rally will start, and shocking truths will be revealed.

Huge thank you to Shannon A. Thompson for sending me this book! I have really enjoyed getting to know you, and you will always have a special place in my heart as the first author who contacted me!

This is the third installment in the Bad Bloods series by Shannon A. Thompson and this follows Violet and Caleb. Violet can turn into a shadow and was part of both the Northern and Southern flocks before the new presidency. She finds Caleb, a musician, artist, and prostitute, and finds out that he needs help. He has an awful STD called Stilts. It will kill him, but he’s found a way to live longer. A special girl can sing to him and he will stop aging.

Because of the way the Bad Bloods series is set up, this is only half the story and the other half takes place in July Lightning, which I plan to pick up soon! I read this book surprisingly quickly. I have always enjoyed Shannon’s books and this one was good, but I have to say I liked the other set of characters a little bit better. That is probably due to the fact that I read the first two books about them, though.

I was a little confused at the beginning of this book because it has been awhile since I read the first two books of this series, but by about halfway through I felt comfortable with the characters again. The first two books were more plot driven and political, but this book was very character driven. I don’t know which I like better, but probably character driven story lines.

I’m very excited to see where the series goes as this ended in quite a cliffhanger! I can’t wait to see what Cal does, and how the rest of the “flock” reacts to everything. I also loved some of the powers we were introduced to in this book. I really enjoyed the girl who could do hair and the boy with the gems and crystals.

Support Shannon by purchasing and reading a few of her books!

You can’t ever go wrong with a cup of normal black tea! I have always been a HUGE fan of PG Tips and I love drinking it with sugar and a splash of milk!