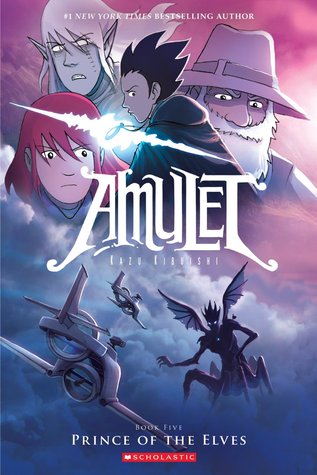 Emily survived the chaos of the Guardian Academy, but Max Griffin has stolen the Mother Stone. With it, the Elf King forges new Amulets that will give him the power to invade and destroy the nation of Windsor. Emily and her friends lead the soldiers of the Cielis Guard in a fight to stop him, but Max stands in their way. And when she seeks information from the Voice of her Amulet, she discovers that the Voice is much more sinister than she ever could have imagined.

I’m so excited to be continuing on with this series! I completely forgot about it until I saw a Youtube video about them, then saw the next three at my library. It’s been a hot minute since I read the first four volumes, but I am so happy to be reading these!

This volume follows Emily and Trellis while they fight against Max who has taken the Mother Stone. The lives of many hang in the middle of all of this fighting, and Emily and Trellis are trying to figure out how to stop the deaths from happening.

This was a really good light-hearted read after Lord of Shadows. I needed something to not put me in a slump, and I always find that graphic novels are great for that. Not going to lie, this took me awhile to get back into the story, but I think I remember quite a bit from when I read them at the end of 2015.

The art style is beautiful; I love that there is so much color everywhere, and I love the different shades of blue in this book. The art is definitely a redeeming quality for this book.

There honestly isn’t much to say about this. It was okay, not my favorite of the series. I like that it is so fast paced, and I am so excited to read the rest of the series!