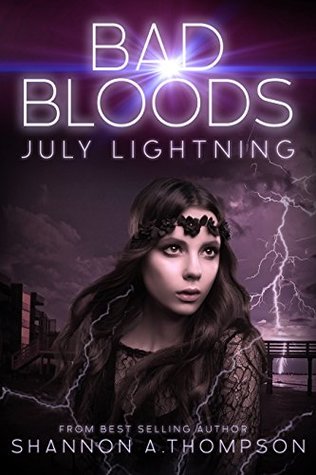 From best-selling author Shannon A. Thompson comes an exciting new duology in the Bad Bloods universe.   Sixteen-year-old Caleb has been called many things: a patient, a musician, even a prostitute…now he has a new name–son. After his identity is uncovered, Caleb bands together with the family he once rejected in order to save the city of Vendona. But it won’t be easy. Enemies wait around every corner–and so do harsh realities. With Violet and Kuthun by his side though, nothing seems impossible. As Vendona sits on the verge of an economic collapse and a massive hurricane threatens the city, Violet and Caleb must show its citizens how to overcome decades of hostility and division to save themselves.Standing or not, a sea will rage, a wall may fall, and all will depend on immortal pain and sacrifice.

HUGE THANK YOU TO SHANNON FOR SENDING ME AN ECOPY OF THIS BOOK!

The conclusion of the Bad Bloods series. Violet and Caleb take on a brand new set of challenges, mainly dealing with the weather, and a situation with Vendona. As this is the fourth book in this series, I will not go into too much detail because spoilers, but I believe this was a nice conclusion to the series as a whole.

Personally, I liked the first two books the best. I loved Serena and Daniel. I loved that they were my age, and they were just figuring out their powers and they had to do a lot of trial and error, but it wasn’t overly depressing. The last two books were quite sad because they dealt with some heavy topics.

One thing I found interesting was that Caleb had a crippling disease called Stilts. It’s an STD that causes him to age or die faster. The way to combat this is to have a young bad blood girl sing to him to keep him healthy. I thought that was an interesting touch to the story. I liked that Caleb was represented as a bisexual character. I liked that it was handled that he liked people for who they were, not based on their gender. I feel like a lot of writing a bisexual character doesn’t take that into consideration super super well, but I like how he was portrayed.

I enjoyed Violet as a character because she was interesting and mysterious. You never really knew what she was planning to do, and I found it refreshing. Paranormal/sci-fi make up some of my favorite books, so I loved that this was taking some magical/paranormal elements and putting it in a dystopian world.

Also, ALWAYS READ THE ACKNOWLEDGEMENTS OF A BOOK! I cannot recommend reading the acknowledgments enough because you learn so much about the book as a whole! I learned that this was based off the falling of the Berlin Wall. Super cool. I knew there was some historical background, but I didn’t know what it was based on. Looking back at it, it was quite obviously tied to the Berlin Wall, but I didn’t realize it at the time.

I would recommend this series to any paranormal lovers, but read them close together! Don’t take long breaks in between the stories *@me* because I think they would be so much more enjoyable that way!

Thanks again to Shannon for working with me :)