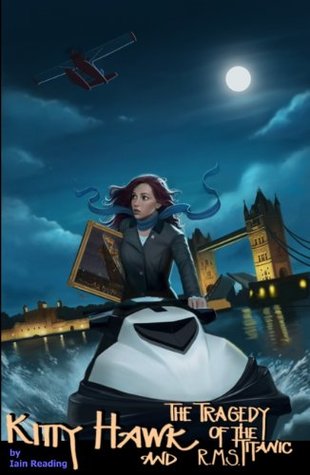 Kitty Hawk and the Tragedy of the RMS Titanic is the thrillingly cryptic fourth installment of the exciting Kitty Hawk Flying Detective Agency Series featuring the intrepid teenage seaplane pilot Kitty Hawk and her various adventures of mystery and intrigue as she follows in the footsteps of Amelia Earhart on an epic flight around the world. This fourth book in the series brings Kitty to the emerald hills of Ireland where she meets a handsome stranger and is quickly swept up in a perplexing hundred-year-old family treasure hunt involving secret codes and puzzling clues that lead her on a fast-paced adventure that carries her from Dublin to London – from the decks of the ill-fated ocean liner Titanic to the temples of ancient Egypt and the streets of Jack the Ripper – until she finally unlocks the mystery and discovers the long-hidden treasure. Much like the earlier books in this series, Kitty Hawk and the Tragedy of the RMS Titanic is a perfect book to fire the imaginations of armchair detectives of all ages. Filled with fascinating and highly Google-able locations and history the reader will find themselves immersed in brand new worlds that are brought to life before their very eyes as Kitty Hawk experiences the stories and history of a doomed ocean liner and unravels the Tragedy of the RMS Titanic.

Huge thank you to Iain Reading for sending me a copy of this book!

This is by far the best in the whole series, and I’m so glad that I got to read it! I loved this one because of the different elements to the story.

I loved that this was set in London. I loved that it talked about the Titanic and Sherlock Holmes. I love that there was a plot point about Jack the Ripper. I think this was the best crafted novel in this series so far, and definitely recommend reading it!

Kitty Hawk decides to help out a boy named Andrew who she gets introduced to during a grand opening for a restaurant. Andrew comes up to her and asks her for her help in discovering the truth of what happened to a crew member on the Titanic. Hijinks ensue, and the mystery gets solved.

I think that this was a well written book, and the plot developed quite nicely. I really enjoyed that there were many different adventures that Kitty got to go on, and I like that she was such a central part of this story.

If you haven’t read this series, I highly recommend it. I have been really enjoying it, and I think anyone from middle grade up would get enjoyment from it. I loved Andrew as a character because he just sounded so cute. I loved the scene right after they figured out the most important part of the clue. So cute.

Again, huge thanks to Iain Reading for sending me this book to review! I can’t wait to finish the series :)