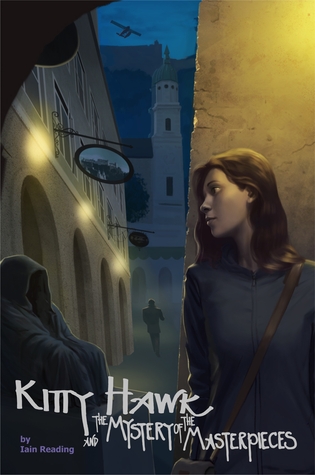 Kitty Hawk and the Mystery of the Masterpieces is the eagerly anticipated fifth instalment of the Kitty Hawk Flying Detective Agency book series. This series features the intrepid teenage seaplane pilot and amateur detective Kitty Hawk as she continues in the footsteps of Nancy Drew and Amelia Earhart on her epic flight around the world.

After meeting up with an old friend in the eternal city of Rome, Kitty Hawk unexpectedly stumbles (almost literally) into a bizarre mystery involving creepy disembodied voices, secret hidden rooms, unbreakable mathematical codes, ominous chain-smoking strangers and an array of plundered artworks by such famous masters as Claude Monet, Camille Pissarro and Vincent van Gogh – all of it wrapped up and entwined in an enigmatic riddle hanging in plain sight right in front of everyone’s noses.

With the help of friends both old and new, Kitty Hawk follows a trail of cryptic clues that leads her on a breathless tour across a quintessentially European landscape – from ancient Roman Italy to the darkest corners of Germany, Austria and beyond.

As with the previous books in the series, this new installment is perfect for firing the imaginations of readers of all ages. Filled with fascinating and highly Google-able locations and history, this exhilarating adventure will have armchair explorers and amateur detectives alike anxiously following every twist and turn as they attempt to help Kitty Hawk try and solve the extraordinarily bizarre Mystery of the Masterpieces.

Huge thank you to Iain for sending me a copy of this book! I’ve loved getting to read this series; thank you!

Kitty Hawk takes on Rome, and mystery solving happens because of it.

I really enjoyed this book. These last two books of this series were so much fun and so full of energy and so adventurous. I really enjoyed this one because it took place in Rome, and I’ve been there, so it was just so much more special to read this. The atmosphere of Rome is just as it’s described in the book. Crazy, crazy busy, but there are always little alleys or back streets with only a few people on them. I loved when Kitty went to the different tourist sites because I’VE BEEN THERE, TOO. It’s seriously so crazy that I’ve been to Rome, and I loved every second of it. Highly recommend.

This book follows Kitty and Charlie, and a family they meet while in Rome. They meet under unlikely circumstances, but quickly become friends. Kitty, of course, instigates a mission. She sees that there are some paintings hanging on her new friend’s walls that look eerily similar to those of famous artists. So similar in fact, that it is soon found out that they are actually originals. Crazy stuff. There’s a secret room, some decoding, and fast driving. Kitty Hawk just doesn’t know how to stay out of the mysteries.

Again, I really enjoyed this book. One complaint, though. Why can’t Kitty and Charlie be a thing? There were hints, but I want them to kiss. I was hoping and praying that they would kiss in front of the Trevi Fountain at the end, but I was sorely disappointed ;) Come on, Iain! I just want some romance!

Thank you again for letting me be part of this story! I can’t wait to read more from you. Also, another Kitty Hawk book? :)