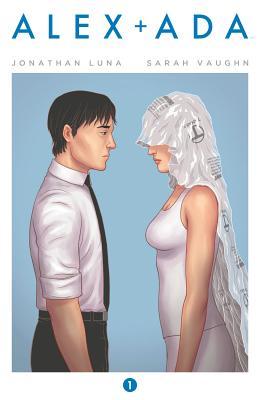 The last thing in the world Alex wanted was an X5, the latest in realistic androids. But after Ada is dropped into his life, he discovers she is more than just a robot.

I went to my new public library in the city I just moved to for college, and they have a HUGE selection of comics and graphic novels. My roommate loves this series, so I decided to give it a try.

I like the idea of this; I love sci-fi, but the art style is very strange and it’s going to take some getting used to. The concept and plot is quite interesting, but there’s just something about it that is strange to me.

Graphic novels have always been hard for me to review because they’re a completely different format than I’m used to, but I’m excited to read the second and third books in this series. I think I’m giving this 3 stars because I’m a little iffy about it right now. I think it could be really good, but I don’t know yet.

This is about a guy named Alex. He talks to his grandma a lot, and she has an android who she loves. She decides to get him one for his birthday so then he can be happy, but Alex feels guilty about getting one. He goes and gets it to be more like a human. He names her Ada, and he starts to have feelings for her. I’m not sure about it yet, but I am anxious to see what happens next…