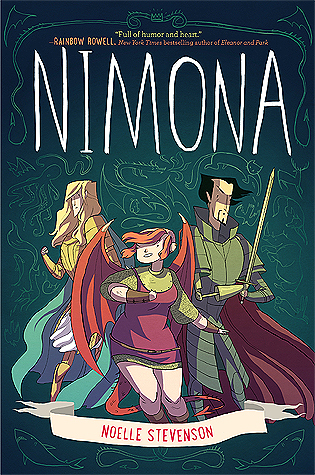 The graphic novel debut from rising star Noelle Stevenson, based on her beloved and critically acclaimed web comic, which Slate awarded its Cartoonist Studio Prize, calling it “a deadpan epic.”

Nemeses! Dragons! Science! Symbolism! All these and more await in this brilliantly subversive, sharply irreverent epic from Noelle Stevenson. Featuring an exclusive epilogue not seen in the web comic, along with bonus conceptual sketches and revised pages throughout, this gorgeous full-color graphic novel is perfect for the legions of fans of the web comic and is sure to win Noelle many new ones.

Nimona is an impulsive young shapeshifter with a knack for villainy. Lord Ballister Blackheart is a villain with a vendetta. As sidekick and supervillain, Nimona and Lord Blackheart are about to wreak some serious havoc. Their mission: prove to the kingdom that Sir Ambrosius Goldenloin and his buddies at the Institution of Law Enforcement and Heroics aren’t the heroes everyone thinks they are.

But as small acts of mischief escalate into a vicious battle, Lord Blackheart realizes that Nimona’s powers are as murky and mysterious as her past. And her unpredictable wild side might be more dangerous than he is willing to admit.

I’m just on a graphic novel kick, and I’m loving it :)

This book follows a girl named Nimona who is a shapeshifter. She wants to be a villain just like her idol, Ballister Blackheart. She finds him, and convinces him to let her be his sidekick and the story takes off from there.

Nimona is different from a lot of people her age because she’s constantly dealing with issues from her childhood, and finding out who she wants to be. Ballister Blackheart holds a grudge that’s so deep to him that he blocks everything else out. They end up making the perfect team.

I enjoyed this book. I didn’t give it higher than 3 stars just because the writing seemed very childish. I understand that Nimona is a kid, but it was very immature sounding. I liked the idea of the story, that the villain becomes someone he wants to be not what society has been telling him to be. I enjoyed that, and I also really liked the artwork. It was interesting to look at and easy to understand. The colors were beautiful, and I would recommend this book to a younger audience.

There wasn’t much plot, so again, I find it a little hard to review, but I did enjoy it. I liked the little adventures that Nimona and Ballister went on. I liked that Nimona called Ballister, “Boss.” It was cute. They became close friends, and I thought that was an important element to the story.

This hinted at Ballister being gay, and I was all for that. I really liked this because it wasn’t obnoxiously stating that he was gay; it was subtle and I don’t know if a lot of people would have caught that. I really loved the little story at the end with Ballister and Goldenloin. It was so cute. Aww.

Overall, I think this is targeted towards middle grade readers, and I think if I would have been exposed to books like this when I was the right age it would have changed my reading experiences.