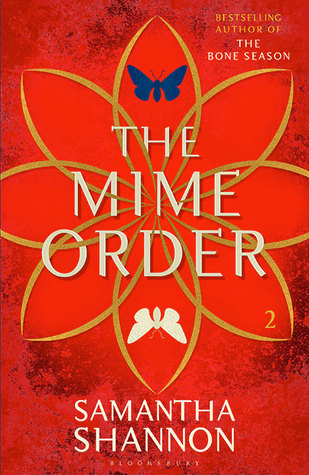 Paige Mahoney has escaped the brutal prison camp of Sheol I, but her problems have only just begun: many of the survivors are missing and she is the most wanted person in London…

As Scion turns its all-seeing eye on the dreamwalker, the mime-lords and mime-queens of the city’s gangs are invited to a rare meeting of the Unnatural Assembly. Jaxon Hall and his Seven Seals prepare to take centre stage, but there are bitter fault lines running through the clairvoyant community and dark secrets around every corner. Then the Rephaim begin crawling out from the shadows. But where is Warden? Paige must keep moving, from Seven Dials to Grub Street to the secret catacombs of Camden, until the fate of the underworld can be decided.

This book was just as amazing as the first one. Wow wow wow.

The Mime Order follows Paige and her little entourage in the hopes of solving all the issues with the Rephiam and the Syndicate and SciLondon. She decides to enroll into the battle to become Mime-lord with Jaxon. The two are the dream team. Mime-lord and mollisher of I-4.

Paige is the most wanted criminal in all of London, and she has to escape people that want to kill her, while also trying to be helpful to everyone. She’s stuck between a rock and a hard place, here…

Oh my gosh. So no spoilers, but the ending was everything I wanted in life it was so fricking good. If you want an epic fantasy/sci-fi series, read The Bone Season, then read this because it’s amazing.

Samantha Shannon has a way of writing that just draws you in so much, and keeps you hooked until the last sentence. Literally the last sentence of this book omg. So much happened in this book, and the only reason it took me so long to read was because I was buddy-reading this and my buddy didn’t read as fast as me. So I’ve had to take breaks while reading, but it was still so good. If this wasn’t part of a buddy-read I would have easily finished it in a couple of days because I was hooked.

WARDEN IS BACK. Yay!! He’s my favorite character, I think, because he’s so mysterious. He’s just trying to do the best for everyone around him, and his feelings for Paige… I don’t know exactly how he feels yet, but I have a feeling the next book will let me know. I’m so excited to read the next book because I know it will answer so many questions!

I cannot wait to see what happens with the rest of the series. I have no idea at all where it’s going to go because I don’t even know what’s going to happen in the next book! I know Samantha Shannon will take it great places because her writing style is gorgeous.

I actually gasped at the end. The last page gets ya, but don’t spoil yourself and go read it *I see you guilty last-page-before-the-book-starts-readers…*

Please read this series. It’s so well written, and there’s so much action. Seriously so much action the whole entire time. Paige is always getting into something, and she somehow always figures out how to get out of it.

I can’t wait for the rest of this series!!