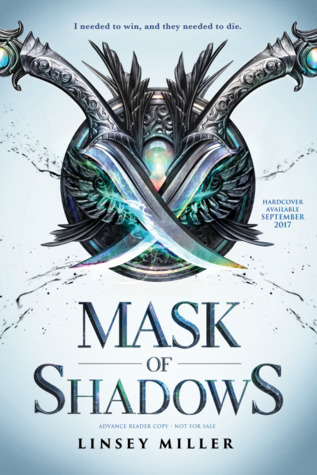 Sallot Leon is a thief, and a good one at that. But gender fluid Sal wants nothing more than to escape the drudgery of life as a highway robber and get closer to the upper-class—and the nobles who destroyed their home.

When Sal steals a flyer for an audition to become a member of The Left Hand—the Queen’s personal assassins, named after the rings she wears—Sal jumps at the chance to infiltrate the court and get revenge.

But the audition is a fight to the death filled with clever circus acrobats, lethal apothecaries, and vicious ex-soldiers. A childhood as a common criminal hardly prepared Sal for the trials. And as Sal succeeds in the competition, and wins the heart of Elise, an intriguing scribe at court, they start to dream of a new life and a different future, but one that Sal can have only if they survive.

I got this book in exchange for an honest review from Netgalley.

This book was nothing special. It honestly was just a rip-off version of Throne of Glass by Sarah J. Maas. It was about assassins fighting to the death, so in that sense it was also a little bit like The Hunger Games.

I hate when books are just rip-offs, and I thought this would be interesting because it was marketed as a gender-fluid main character. Okay. A little bit about that.

The ONLY representation of that was when they said that they liked being called what they were dressed as. Which I’m assuming is a quality of someone who is gender-fluid, but there was nothing other than that. There was no reason other than the fact that the author wanted it to be a diverse book. Which pisses me off. Have adequate representation, and if you’re going to try, at least do it right and do it justice. Please. There are people that refer to themselves as gender-fluid, and I feel like this isn’t good representation of that.

There was also no beginning to the story. None at all. It just jumped right in with Sal fighting people pretty much. I’m not about that. Give me a little background information, please.

The romance in this book was also quite below average, and I was so disappointed with that. Because the gender-fluid thing wasn’t really introduced well, the romance seemed so rushed and fake because there was no back story on sexual preference. Sal just kinda ended up liking this girl, but she was of course the one who he robbed at the beginning. UGH give me some actual plot please.

I would not recommend this book just because of the poor representation attempt. I’m sad because I wanted this to be good. Ugh, life.