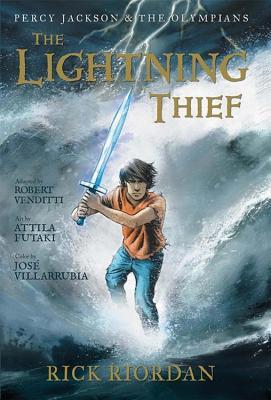 Mythological monsters and the gods of Mount Olympus seem to be walking out of the pages of twelve-year-old Percy Jackson’s textbooks and into his life. And worse, Zeus’s master lightning bolt has been stolen, and Percy is the prime suspect. Now, he and his friends have just ten days to find and return Zeus’s stolen property and bring peace to a warring Mount Olympus.

I picked this up because I was in the mood for something light and short, and it did not disappoint! I love the Percy Jackson and the Olympians books, and this was just a graphic novel version of the first book.

I feel like this graphic novel was more based on the movie than on the actual book. It seemed to me like some of the plot points were different than the book, but I also did read that book a long time ago.

This graphic novel followed Percy, Annabeth, and Grover through their quest to retrieve Zeus’ lighting bolt from the Underworld. It happened similarly to how it happened in the original book, but was made more brief, as it was a concise version of the story.

I look forward to reading the second one of this series because I got it from the public library at the same time as this one! I think it will be interesting, because Sea of Monsters is one of my favorites of the series as a whole. I love getting back into this world that Rick Riordan has created, and I’ve missed his easy-going writing style.

I would recommend this to middle-school aged kids. I think that it would be interesting to read this graphic novel right after finishing the first book, and comparing it. I feel as though it would be an interesting way to take in the story. The characters also did not look like sixth graders, but that’s just me. They looked hecking old, but whatever. You do you, Rick Riordan.