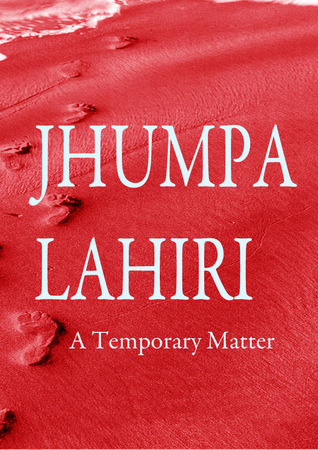 This is a short story in the anthology called Interpreter of Maladies. My boyfriend read this book for one of his classes, and said that I would enjoy the stories, so here I am.

This story follows a couple who suffer from communication issues because of their grief over their miscarriage. The two were in love at one point, but have fallen out of love and find themselves ignoring each other, and seeking out solitude. They get a message saying that in order to fix some power lines, everyone in the neighborhood will have to turn off their lights from 8 pm until 9 pm for a week. At first they dread the conversations they’ll have to have without electricity, but start having meals by candlelight. They play a “game” where they each tell one thing that they’ve never told the other while sitting in the dark. They listen and don’t judge one another. The man thinks that it might be possible to rekindle the love they once had, but it might not be able to happen under certain circumstances.

This was such an amazingly written story and I would recommend it! It took me by surprise, because with three pages left of the story, EVERYTHING was going so well, then the ending was just so sad. Reading this short story made me question why I don’t read short stories more often. I honestly think the reason is because I only ever read them for class, so when I do outside of class they feel a little forced, but I’m giving these a chance :)

I thought that because the couple in the story had gone through something hard they would get back together and make up. I am kind of clueless in the whole “falling out of love” thing, but I wish they could have worked things out. Even though the ending was sad, I thought it was a perfect way to conclude the story as a whole. I think it would have been forced and unrealistic for them to get back together and work everything out for themselves. I believe this is a testament to how some relationships end up, which is sad, but it’s true.

I thought it was a beautiful story, and can’t wait to continue on with the rest in this anthology!