On the Merits of Unnaturalness (The Bone Season) – Samantha Shannon 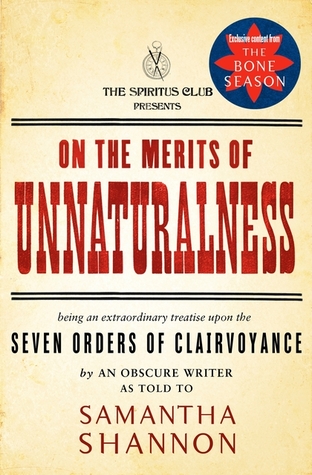 Title: On the Merits of Unnaturalness

Be aware, my good Reader, that this Pamphlet, no matter how controversial its content, must never fall into enemy Hands.

The most important piece of clairvoyant literature written in the twenty-first century, On the Merits of Unnaturalness is a pamphlet first published anonymously in 2031 by Jaxon Hall, the voyant who would later become the mime-lord known as the White Binder.

Hall was the first to index both known and supposed forms of Unnaturalness, resulting in the classification of the Seven Orders. This controversial piece of literature spread across the voyant underworld like a plague, revolutionising the syndicate but also creating discord in the form of brutal gang wars between the newly-divided categories, the scars of which can still be seen today.

This information was good to know, but it was totally not necessary to The Bone Season story. This is the pamphlet that Jaxon writes in the series, and the whole time I could ONLY think of how angry I am at him for other things… ugh.

I was kind of bored while reading this, but I do think it was valuable information. This novella just described the seven levels of clairvoyance in this world. There were some references to the 1980s which was funny because in the series it’s 2059, so to them the 1980s was forever ago. I just thought it was comical. There were little snippets that were funny, but I did think that Jaxon dwelled on his order the most. Obviously he knew the most information about that because he was writing from his own experience, but it made it a little suspicious.

There’s not much to say about this, but my piece of advice would be to not spend the $2 on this ebook.