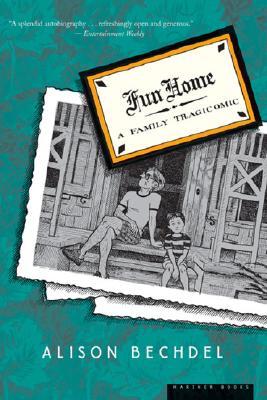 Meet Alison’s father, a historic preservation expert and obsessive restorer of the family’s Victorian home, a third-generation funeral home director, a high school English teacher, an icily distant parent, and a closeted homosexual who, as it turns out, is involved with his male students and a family babysitter. Through narrative that is alternately heartbreaking and fiercely funny, we are drawn into a daughter’s complex yearning for her father. And yet, apart from assigned stints dusting caskets at the family-owned “fun home,” as Alison and her brothers call it, the relationship achieves its most intimate expression through the shared code of books.

When Alison comes out as homosexual herself in late adolescence, the denouement is swift, graphic — and redemptive.

I was blown away by this comic/graphic memoir. I was really impressed and even though it was not what I was expecting, I’m so glad that I read it.

This memoir follows Alison who is struggling with gender identity and growing up in general. She lives in a broken household with her mother, two brothers, and father who has some unstated issues.

The way that this book was written was so interesting because it jumped back and forth during time which I’ve not experienced with a comic before. It wasn’t confusing at all and I was completely immersed the whole time. The basic plot points are all told within the first 50-100 pages, then it goes back through and gives you key important details. I think that it was a very interesting way of portraying it, but it worked really well.

At the beginning I hated her father. To me he just seemed like a creepy slightly pedophilic man who just wanted young guys, but after reading the whole story you find out that he struggled with his sexuality and his gender identity. Alison and her father end up making amends, but mostly through her recollection of memories of him. It was such an interesting take on a “normal” formatting. Both Alison and her father wanted to be the other gender, so they bonded over that later in life after she came out to her family. He told her some things that had happened in his past that made her relate to him more.

I don’t really understand why Alison’s parents were together in the first place because he’s been gay/transgender his whole life. I don’t know if her mother was in a similar situation, but it ended up “working out” in a sense at the end.

There was amazing representation of anxiety and OCD in this book that I really connected with. I used to have anxiety through elementary and middle school and that derived from my need for perfection. I am fairly certain that I dealt with OCD, but didn’t know what it was called and was never formally diagnosed with it. But I remember feeling so similarly to Alison during these parts of the book. I know what it’s like to need to do things a certain way in a certain order. Or making sure my objects in my room didn’t “feel” like one was preferred over the other. It sounds strange to people who haven’t dealt with it, but it made total and complete sense to me.

I would highly highly highly recommend this book to anyone, especially if you’ve dealt with similar situations as Alison or members of her family. Even if you’re not huge into comics or graphic memoirs, give it a try!!