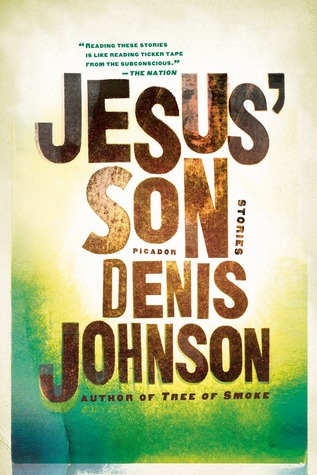 Jesus’ Son is a visionary chronicle of dreamers, addicts, and lost souls. These stories tell of spiraling grief and transcendence, of rock bottom and redemption, of getting lost and found and lost again. The raw beauty and careening energy of Denis Johnson’s prose has earned this book a place among the classics of twentieth-century American literature.

I have the theory that reading for class makes literally everything worse. But, that doesn’t change the fact that I found this book very lackluster.

After finding out I had to read this book for class by Monday, I just decided to read it all in one day because it’s extremely short, but I was very confused the whole time. Honestly, it felt like everyone knew something that I didn’t, but not in a charming and fun try-to-find-it-out sort of way.

This was a series of short stories, some of which were slightly correlated, that were about addicts. I have no idea why I had to read this for my class other than the fact that the author went to the Iowa Writer’s Workshop, but I did it anyway. I didn’t relate to any of the stories at all and that’s because I’ve never had to deal with addiction or anything remotely similar. I found that the stories didn’t make sense because they were so short. Some were less than 5 pages, but were just chilling and being part of this book.

I don’t have too many thoughts because I was mostly confused. I might add to this post after we discuss this, but probably not. There was NO correlation with this book being called “Jesus’ Son.” There was nothing about it at all, so I’m also confused by the title. The last story was creepy because it was about this guy that just creeped on this couple in the hopes of catching them having sex. Hmm. There’s something off about that. He was also obsessed with watching the woman get out of the shower and dry herself off and put her clothes on. I don’t understand.

A lot of people were gushing about how the writing was so poetic and beautiful, but I disagree wholeheartedly. I thought it felt choppy and I got annoyed while reading it because there was no cohesion with anything. I’m not saying to not read this book, but please don’t waste your time reading it.