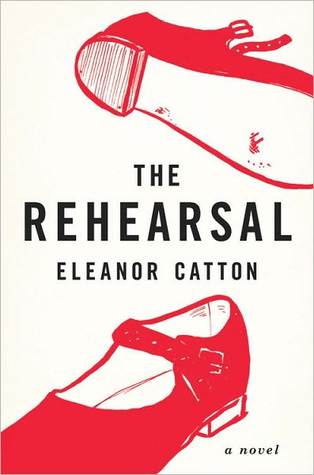 All the world’s a stage – and nowhere is it that more true than at an all-girls high school, particularly one where a scandal has just erupted. When news spreads of a high school teacher’s relationship with his underage student, participants and observers alike soon take part in an elaborate show of concern and dismay. But beneath the surface of the teenage girls’ display, there simmers a new awareness of their own power. They obsessively examine the details of the affair with the curiosity, jealousy, and approbation native to any adolescent girl, under the watchful eye of their stern and enigmatic saxophone teacher, whose focus may not be as strictly on their upcoming recital as she implies.

I loved this book. I was so pleasantly surprised about this and I REALLY want to read more from this author. For my class I had to write a book review about the book, so I’m just going to copy and paste that here…. :)

In Eleanor Catton’s debut novel, The Rehearsal, two storylines are followed that eloquently and seamlessly blend together throughout the novel. Catton, an author from Canada, studied English at the University of Canterbury and completed her Master’s degree in Creative Writing at The Institute of Modern Letters, Victoria University of Wellington. The Rehearsal is Catton’s master’s thesis for her MFA from the Iowa Writers’ Workshop at the University of Iowa.

The Rehearsal opens with a saxophone teacher talking with a parent about her daughter during music lessons. This conversation quickly unfolds and becomes the basis of the first storyline. During a music lesson with the saxophone teacher the main character, Isolde, is introduced. Isolde makes an excuse about not practicing for her lesson by confiding in her teacher that her older sister, Victoria, was raped by the instrumental music teacher at their high school, Mr. Saladin.

Many of the students that went to school with Victoria and Isolde made it apparent that the relationship between Victoria and Mr. Saladin was consensual. The students claimed to have seen the couple together on multiple occasions, and it is later found out that the two are still seeing each other. Because there was a news story leaked about the inappropriate relations between teacher and student, Isolde and some of Victoria’s friends are required to go to counselling sessions with the school’s guidance counselor to talk about what happened. Isolde meets a girl named Julia at the counselling sessions and they form a friendship.

The second storyline opens with a first-year college student named Stanley auditioning for the Institute for drama. He wants to become an actor, and going to this Institute is his dream. He goes through the audition process and learns that he gets into the school. The first-year drama students have to put on a show with no help from professors, and decide to take the local news story about the relationship between Victoria and Mr. Saladin and turn it into a play.

Isolde and Stanley meet and start dating; Isolde is fifteen and Stanley is eighteen. A few short weeks later Stanley gets called into one of his instructor’s offices and is questioned about his relationship with Isolde. The saxophone teacher saw that the two were forming a relationship and was concerned about Isolde’s safety. Stanley brings it up to Isolde and the two have a fight about it. To try and not make Stanley angrier, she invites her parents to go to the first-year student play with her. Neither she nor her parents know that the play is based off the affair with Victoria and Mr. Saladin. After watching the play, Isolde and Stanley’s families get together to talk about it and its content…

I was pleasantly surprised by this book because the first few chapters were quite slow and confusing with the different stories. While reading the beginning I was distracted by the fact that the language used in conversations was unrealistic. There were too many metaphors and large words to be a real conversation between high schoolers, but as the story progressed, so did the writing style. The Rehearsal has strong themes of sexuality, and there are many references to being lesbian or gay.

The main character Isolde is uncertain about her sexuality and uses Stanley and Julia to experiment to see if she likes men, women, or both genders. The saxophone teacher, who never gets a name throughout the novel, is also represented as lesbian, which put a unique twist on the story which I was not expecting.

The saxophone teacher had fantasies about one of her friends who she has been in love with, and places herself and her female students in her fantasies as well. This reminded me of the relationship between Victoria and Mr. Saladin. I thought it was interesting with different ways Catton used sexuality and intimacy throughout the novel.

Stanley and his fellow first-year students also dealt with sexuality and gender roles during the play they wrote and performed. One of the objectives with the play was to use a prop chosen by last year’s students to use as a main theme or motif to guide the play. The object was a deck of cards, so they spun that into drawing cards at certain points of your life in order to determine sexuality and gender. This was beautifully explained during the brainstorming process of figuring out what to make their play about.

One of my favorite things about this book was the fluidity of time. During the first storyline, the sections were broken up by days of the week, where in the second storyline they were broken up by months. My interpretation of this was that time passes differently at different ages. Because you haven’t experienced much life when you’re young, every single day seems long and monotonous, but as you get older time seems to go faster. It doesn’t seem like you break it up into days or weeks even, but months or periods of your life.

There was also fluidity with time in the sense that some scenes were repeated but from another perspective. Because time was represented differently in both the storylines, there were some discrepancies between when events actually occurred. It gave the reader a sense of knowing more than the characters, and that made the reader want to continue reading to find out when every person would find out information.

The characters in this novel were beautifully broken, and made you want to know everything about them. All the characters were struggling with something different, but didn’t know the best way to deal with their problems. Some of the opinions they brought to the foreground of the story made me really have to think about what I was reading, and how I felt about the issues they were bringing up.

I am extremely impressed with Eleanor Catton as this is her debut novel. The themes that were discussed were talked about eloquently and fit together with the whole story wonderfully. As I read I try and make predictions about the way a story is going to go, and I couldn’t seem do that with this. Every page contained something new and interesting that added to the story. Overall I enjoyed this book immensely, and I look forward to reading more works from Catton in the future.