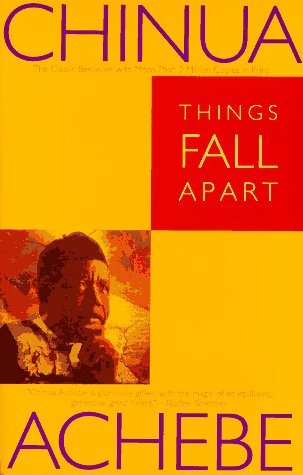 THINGS FALL APART tells two overlapping, intertwining stories, both of which center around Okonkwo, a “strong man” of an Ibo village in Nigeria. The first of these stories traces Okonkwo’s fall from grace with the tribal world in which he lives, and in its classical purity of line and economical beauty it provides us with a powerful fable about the immemorial conflict between the individual and society.

The second story, which is as modern as the first is ancient, and which elevates the book to a tragic plane, concerns the clash of cultures and the destruction of Okonkwo’s world through the arrival of aggressive, proselytizing European missionaries. These twin dramas are perfectly harmonized, and they are modulated by an awareness capable of encompassing at once the life of nature, human history, and the mysterious compulsions of the soul. THINGS FALL APART is the most illuminating and permanent monument we have to the modern African experience as seen from within.

Things Fall Apart follows two storylines that intertwine. The underlying message deals with European invasion and taking over of culture in Africa. I read this for my Foundations of the English Major course, and it was fairly quick read because the writing style was so simple, but the story was a little hard to follow.

I LOVED the writing style because of the simplicity. It was beautiful and easy to read, but there was something that made it difficult to understand. I’m not sure if it was because the names were hard to pronounce and distinguish or if I just didn’t know enough about the Ibo culture to fully appreciate it, but there were some parts that definitely went over my head.

The beginning was about the Ibo culture, but then part three was all about the Europeans coming in and trying to convert everyone to Christianity and that just made me angry. I’m a huge advocate for the fact that all cultures matter and that cultures aren’t wrong, just different to your own. It makes me sick that this happened and is still happening today because, yes I understand that you want people to believe what you believe, but other people’s cultures and religions are valid.

I’m looking forward to the discussion about this book for class because I want to understand more about the story. I think this was an interesting read and would recommend it if you’re looking to dive into another culture.