The Cruel Prince (The Folk of the Air #1) – Holly Black 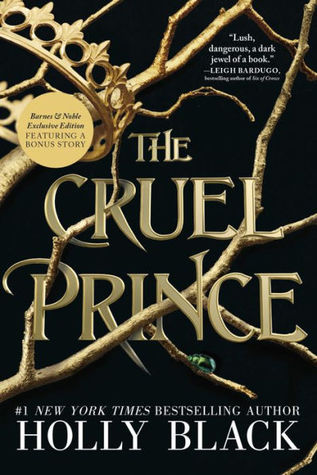 Title: The Cruel Prince (The Folk of the Air #1)

Of course I want to be like them. They’re beautiful as blades forged in some divine fire. They will live forever.

And Cardan is even more beautiful than the rest. I hate him more than all the others. I hate him so much that sometimes when I look at him, I can hardly breathe.

Jude was seven years old when her parents were murdered and she and her two sisters were stolen away to live in the treacherous High Court of Faerie. Ten years later, Jude wants nothing more than to belong there, despite her mortality. But many of the fey despise humans. Especially Prince Cardan, the youngest and wickedest son of the High King.

To win a place at the Court, she must defy him–and face the consequences.

In doing so, she becomes embroiled in palace intrigues and deceptions, discovering her own capacity for bloodshed. But as civil war threatens to drown the Courts of Faerie in violence, Jude will need to risk her life in a dangerous alliance to save her sisters, and Faerie itself.

I knew that I was going to love this book and I’m so glad I picked it up this month!

The Cruel Prince follows a girl named Jude who is mortal and living in Faerie. Her mortal mother used to be married to a faerie but then ran away while pregnant with her older sister, Vivienne. Jude has a twin named Taryn, and at the age of 7, the ex-husband faerie comes and kills the girls’ parents and steals them away to live in Faerie. The three girls grow up as members of the court as their “father” is an important member of the Faerie society. All Jude wants is to be a knight of the faeries, but being mortal sets her back from this. She has to deal with the school bullies who just so happen to be led by one of the princes…

This book was really great! THE PLOT TWISTS. Oh my gosh I literally did not see them coming at all.

I think this is a great fantasy to read if you’re just getting into fantasy because it isn’t too difficult to understand, and even though there are multiple mini storylines, its easy to follow. The world building of this book was beautiful and I can see why people call Holly Black the master of the fae world. I read The Darkest Part of the Forest quite awhile ago, but I’m even more impressed with the world building and characters in this one.

This book is dedicated to Cassandra Clare. Omg.

For Cassandra Clare, who was finally lured into Faerieland.

ugh too cute. I love when authors are best friends cause CUTE.

I can’t wait to see where this series goes because there are SO MANY ROUTES IT COULD TAKE. I am HERE for Prince Cardan. I loved him right away even though he was being horrible to Jude because I knew that there was going to be something about him… I was right.

Prince Cardan is just so…. unique. He is cruel *thee cruel prince? hmm idk* to Jude, but there’s something different about him that I noticed right away. I can’t exactly put my finger on it because it wasn’t just one moment, but I knew that he would become a main character.

Jude is headstrong and knows what she wants, so when she starts getting distracted by the beautiful faerie boys. Girl, I knew that was going to end badly.

I have so many theories of what could happen in the next books and you’ll have to watch my YouTube review that will be going up soon!

The Wicked King (The Folk of the Air #2)