Make Your Bed: Little Things That Can Change Your Life… And Maybe the World – William H. McRaven 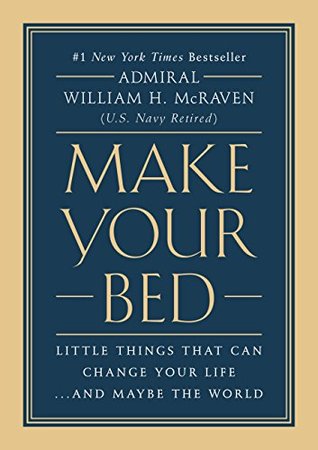 Title: Make Your Bed: Little Things That Can Change Your Life… And Maybe The World

If you want to change the world, start off by making your bed.
On May 17, 2014, Admiral William H. McRaven addressed the graduating class of the University of Texas at Austin on their Commencement day. Taking inspiration from the university’s slogan, “What starts here changes the world,” he shared the ten principles he learned during Navy Seal training that helped him overcome challenges not only in his training and long Naval career, but also throughout his life; and he explained how anyone can use these basic lessons to change themselves-and the world-for the better.

Admiral McRaven’s original speech went viral with over 10 million views. Building on the core tenets laid out in his speech, McRaven now recounts tales from his own life and from those of people he encountered during his military service who dealt with hardship and made tough decisions with determination, compassion, honor, and courage. Told with great humility and optimism, this timeless book provides simple wisdom, practical advice, and words of encouragement that will inspire readers to achieve more, even in life’s darkest moments.

I gained such a new appreciation for Navy Seals after listening to this audiobook.

This is a short book talking about lessons Admiral William H. McRaven learned during his career as a US Navy Seal. The title originally caught my attention because I, too, make my bed every morning. I love climbing into a nicely made bed, and this was the first lesson talked about during the book.

Part of the training for becoming a Navy Seal is to look professional, and that always included the barracks. Each individual was to make their bed pristinely every single morning. I liked that this is what the book started with because the idea behind it is this: if you make your bed, no matter what, you’ve started your day off with finishing a task. It’s simply that you can have something positive done right at the beginning of your day. Plus having a nicely made bed is so much nicer to sleep in, and makes your bedroom look 100x more organized.

I liked the advice given throughout this book, but I found some of it to be pretty generic. I was intrigued by the stories the author told about his life in the Navy. I knew it was intense, but not as intense as he was describing it. There is literally no way that I could do half of what he had to endure. Anyway, I liked the stories even though the advice was a little average.

There were moments that I was getting chills or getting teared up because of some of the stories. I think I’m just becoming a big softy, but I almost started crying multiple times just because something was so touching.

I’ve come to really love self-improvement books because there is ALWAYS something to be gained from the advice given. I love having positive information in my ears as I walk on campus during the day.

Yay for the first book of the year!