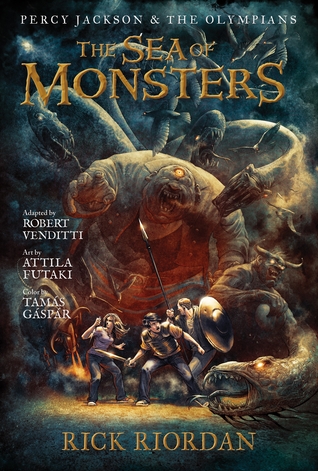 Seventh grade has been surprisingly quiet for Percy Jackson. Not a single monster has set foot on his New York prep-school campus. But when an innocent game of dodgeball among Percy and his classmates turns into a death match against an ugly gang of cannibal giants, things get…well, ugly. And the unexpected arrival of his friend Annabeth brings more bad news: the magical borders that protect Camp Half-Blood have been poisoned by a mysterious enemy, and unless a cure is found, the only safe haven for demigods will be destroyed.

In the follow-up to the wildly popular The Lightning Thief, The Graphic Novel, Percy and his friends must journey into the Sea of Monsters to save their camp. But first, Percy will discover a stunning new secret about his family–one that makes him question whether being claimed as Poseidon’s son is an honor or simply a cruel joke.

This is the second installment of the Percy Jackson Graphic Novel series, and I quite enjoyed it except for one part, which is why I gave 3, instead of 4 stars.

So, we all know that in the Percy Jackson series, Percy has a cyclops brother. In this graphic novel, he goes to school with Percy, and get bullied because he’s a little slower than the other kids. The part that I HATED of this book was that some of the bullies from the school said, “You’re such a loser, Jackson. You might actually have friends if you didn’t hang out with this retard.” *notice that one word is bolded…..* Percy replies with, “He’s not retarded!”

Okay. So, I am totally not okay with this, because firstly, no one should be calling anyone a retard, because that is an outdated, not socially acceptable word. Secondly, Percy should have said something to the extent of ‘that’s not right to say’ or ‘don’t call anyone a retard.’ I hate when books or graphic novels, especially those geared towards a younger audience, use derogatory terms toward people who are slower mentally than others.

Everyone is still a person, no matter their mental capabilities, so I don’t understand why anyone would be so insulting to another person.

This scene happened at the beginning, so after I read it I just filed it away to talk about later, but the rest of this graphic novel was good.

Like I said in the last review, I love Percy Jackson. I love getting thrown back into this world, and it’s different to digest in graphic novel form than in full length novel. They still look MUCH older than thirteen years old… Anyway, I look forward to reading the next one!