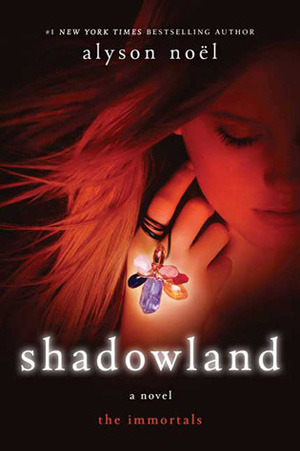 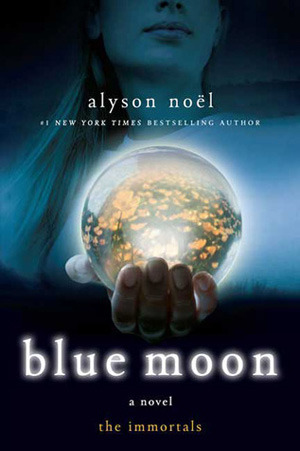 Alyson Noël’s bestselling Immortals series has been hailed as “addictive,” “beautiful,” “haunting,” and “mesmerizing.” In Blue Moon, Ever has a chance to bring her family back from the dead – but only if she’s willing to sacrifice the guy she loves more than life itself.

Just as Ever is learning everything she can about her new abilities as an immortal, initiated into the dark, seductive world by her beloved Damen, something terrible is happening to him. As Ever’s powers are increasing, Damen’s begin to fade after he is stricken by a mysterious illness that threatens his memory, his identity, his life.

Desperate to save him, Ever travels to the mystical dimension of Summerland, where she uncovers not only the secrets of Damen’s past – the brutal, tortured history he hoped to keep hidden – but also an ancient text revealing the workings of time. With the approaching blue moon heralding her only window for travel, Ever is forced to decide between turning back the clock and saving her family from the accident that claimed them – or staying in the present and saving Damen, who grows weaker each day….

I didn’t like this book at all. It took me over a week and a half to even finish it. I liked the first book, Evermore (The Immortals #1) – Alyson Noël, but this one was just so slow. I dreaded picking it up, thus the two stars. I didn’t like the romance at all. Halfway through, everything cut off. The whole book was Ever saying “Damen! I’ll save you! I’ve no idea how, but I’ll do it!” Cry. Me. A. River. No, actaully, don’t do that. I don’t want to have to look at your wretched tear river.

I don’t like Ever, she’s too whiny and needy. She would rather die (even though she’s immortal) than have Damen be sad. Get over it, you’re irritating. Damen isn’t too bad, but I hated that he checked out halfway through. No, stop it right now.

I would be Riley, Ever’s dead little sister (technically a ghost) because she’s funny and she gets to go to Summerland whenever she wants. I would definitely not be Ever. She is so extremely irritating.

*Sorry for being MIA for the past week! I was on vacation and I wasn’t able to bring my computer. I read a lot and wrote reviews for the books I read! #makesupforit*

This Teaser Tuesday is from the book Blue Moon (The Immortals #2) – Alyson Noël.

“In English, it’s even worse than I anticipated. And I’m not even halfway down the aisle before I notice that Damen is now sitting my Stacia.” ~ Page 113

I failed BookTube-a-thon. I did. Miserably failed. I decided to have my friend over because Christmas break just started and I got almost no reading done. I didn’t even finish two books, one of which I only had 100 pages left in…. Yeah, oops. Oh well, I gave it a go and I’m glad I finished The Lightning Thief (Percy Jackson and the Olympians #1) – Rick Riordan *and read the full review!!* and I started, and am almost halfway done with, Blue Moon (The Immortals #2) – Alyson Noël. I wish I could have read more, but I suppose that will have to do :)

Hmmm. Well, this hasn’t been going as planned. I thought I was going to finish two books last night but then I got distracted by YouTube. Shocking. So this morning I woke up and told myself I wasn’t getting up until I finished a book. So that went, read for 20 minutes, get out of bed, eat breakfast, then watch TV. So I haven’t read too much. Oops. I knew five books was being very very optimistic. :) Shucks, yeah, oh well. I think I will make my goal to finish Blue Moon (The Immortals #2) – Alyson Noël and start another from my BookTube-a-thon TBR. Last night I finished The Lightning Thief (Percy Jackson and the Olympians #1) – Rick Riordan and this is my review of it! This morning I started Blue Moon (The Immortals #2) – Alyson Noël. I like it so far, although I am only on page 73. It’s not as good as the first one at this moment, but it’s okay.

PROGRESS: ****SPOILERS****Right now in Blue Moon (The Immortals #2) – Alyson Noël Ever and Damen are finishing up at the play, Hairspray, that Ever’s friend, Miles, is in. She went to a Victoria’s Secret earlier that day to get sexy underwear because she is planning to lose her virginity sometime that evening with Damen. Apparently Damen has been waiting for 400 years to have sex with this girl, but she always got killed right before they were about to do it. First of all, Ever is 16 or 17 (not really sure which) and she is going to have sex with her boyfriend. Great role modeling for these young girls that are reading this series. I understand that there needs to be romance within the story, but isn’t making out enough? I just do not understand the point of putting sex in YOUNG ADULT books. Think about it, young adult. Not new adult. No, we are talking younger girls reading this. I personally think the reading range of young adult books is 14+, granted I read some YA books a couple years ago. Let these little girls enjoy their childhood. Do not go around telling them that if you love someone, even at a young age, you can do it. NO. Not acceptable in my eyes. I know that it’s wrong and I know that I can separate fiction and reality (although the thin line may be blurred at some points) but I’m a mature 14-year-old. I think sex should be reserved for new adult and adult fiction. It’s special and should be between two people that are really in love, meaning after they are married, not in highschool when they are “in love.” Those are just my thoughts on this topic.

This weekend I plan to finish The Lightnight Thief (Percy Jackson and the Olympians #1) – Rick Riordan and then start Blue Moon (The Immortals #2) – Alyson Noël. I know I’ve been MIA, but like everyone else, I had semester tests this week. But finally I am on Christmas Break! Yes! We are going on our family vacation on the 26th of this month and I’m so excited! We get to go to Sea World and I’m ecstatic :)

#FridayReads is saying what you will be reading on Friday night (cause we’re losers) and over the weekend. Tonight I’m going to finish Fury (The Fury Trilogy #1) – Elizabeth Miles on the car ride to a Lego League competition for my brother. I am on page 290 of 370 so I should be able to finish this in the car tonight. After I finish that book I will proceed to read Vampire Academy (Vampire Academy #1) – Richelle Mead. I’ve heard so many wonderful things about the Vampire Academy series and I’m very excited to read it. My way of choosing books is by drawing a book title from my TBR reading jar. I can never decide which book I want to pick up, so I draw one of the titles out and read it no matter what. I always finish series and I always always finish a book. Even if I absolutely hate it, I will continue on. Continuing on, after I finish Vampire Academy (Vampire Academy #1) – Richelle Mead I will read Blue Moon (The Immortals #2) – Alyson Noël. I liked the first book (Evermore (The Immortals #1) – Alyson Noël) but it was very different. It was insta-love, which bothers me a lot. It’s so irritating to read and so….. almost forced I would say. Like I said, I draw from my TBR jar so then all my books get a fair chance…. I feel all guilty when I see all my unread books (over 100) sitting on my shelves staring at me…..