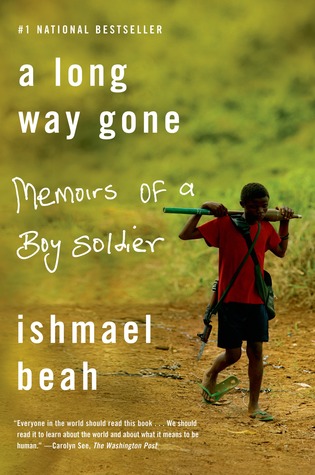 At the age of twelve, Ishmael Beah fled attacking rebels in Sierra Leone and wandered a land rendered unrecognizable by violence. By thirteen, he’d been picked up by the government army, and Beah, at heart a gentle boy, found that he was capable of truly terrible acts. At sixteen, he was removed from fighting by UNICEF, and through the help of the staff at his rehabilitation center, he learned how to forgive himself, to regain his humanity, and, finally, to heal.
This is an extraordinary and mesmerizing account, told with real literary force and heartbreaking honesty.

The novel starts out by talking about Ishmael and his life in Sierra Leone. Ishmael enjoys dancing and rapping, and participates in talent competitions with his friends. Ishmael and his younger brother head out to stay at their grandmother’s house in order to go to a talent competition the next day, and they see that the war has started. Ishmael and his brother go out and search for food, and decide to go back for their family, but can’t get back into their village because of the bloody battles that are happening. The two boys end up running away and meeting a group of boys about their age, and they are all taken to become part of the war. Ishmael and the group of boys have to destroy villages and learn to shoot guns, and as rewards all of them get drugs. This goes on for a large part of Ishmael’s life, until they suddenly are taken to a rehabilitation center away from war. He gets better and copes with his PTSD and ends up feeling okay enough to go live with his uncle, aunt, and cousins. Ishmael gets the opportunity to go to New York City for a conference talking about the hardships of war, and gets to leave the war-stricken country. He comes back to a life he thought was fortuitous, but ended up being thrown back into the war in a way. He runs from his family in order to be safe, and goes to NYC to live with one of the women he met at the conference. The story ended with a parable about a monkey and a hunter. Choose to shoot the monkey and kill your mother, or not shoot the monkey and kill your father. At the very end of the story, Ishmael said, “that if I were the hunter, I would shoot the monkey so that it would no longer have the chance to put other hunters in the same predicament,” (262). I think that this ending showed how much Ishmael had developed as a character because he didn’t want revenge on anyone specifically. Ishmael wanted to help people in the future so that they wouldn’t have to go through what he went through as a young boy.

I had to review this for my English III class, so that’s why it sounds somewhat formal…

I honestly didn’t love this book. It was okay, but not great. I have never read anything like this because I usually stray away from books about wars. This is about the civil war that happened in Sierra Leone, and the actions Ishmael Beah took throughout his life. This book is mostly centered on his childhood and being a boy soldier in the war. I would recommend this book to anyone who enjoys reading about wars and battles. There were a lot of action scenes in this book. Although I didn’t enjoy it, I can see why people would want it to be part of high school curriculum.