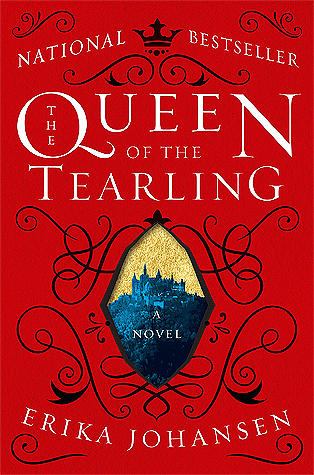 Magic, adventure, mystery, and romance combine in this epic debut in which a young princess must reclaim her dead mother’s throne, learn to be a ruler—and defeat the Red Queen, a powerful and malevolent sorceress determined to destroy her.

On her nineteenth birthday, Princess Kelsea Raleigh Glynn, raised in exile, sets out on a perilous journey back to the castle of her birth to ascend her rightful throne. Plain and serious, a girl who loves books and learning, Kelsea bears little resemblance to her mother, the vain and frivolous Queen Elyssa. But though she may be inexperienced and sheltered, Kelsea is not defenseless: Around her neck hangs the Tearling sapphire, a jewel of immense magical power; and accompanying her is the Queen’s Guard, a cadre of brave knights led by the enigmatic and dedicated Lazarus. Kelsea will need them all to survive a cabal of enemies who will use every weapon—from crimson-caped assassins to the darkest blood magic—to prevent her from wearing the crown.

Despite her royal blood, Kelsea feels like nothing so much as an insecure girl, a child called upon to lead a people and a kingdom about which she knows almost nothing. But what she discovers in the capital will change everything, confronting her with horrors she never imagined. An act of singular daring will throw Kelsea’s kingdom into tumult, unleashing the vengeance of the tyrannical ruler of neighboring Mortmesne: the Red Queen, a sorceress possessed of the darkest magic. Now Kelsea will begin to discover whom among the servants, aristocracy, and her own guard she can trust.

But the quest to save her kingdom and meet her destiny has only just begun—a wondrous journey of self-discovery and a trial by fire that will make her a legend . . . if she can survive.

This book will be a beautifully designed package with illustrated endpapers, a map of the Tearling, and a ribbon marker.

I’m kind of torn between giving this 3 stars and giving this 4 stars, but I don’t do half stars…. I really liked the last half of this, but the beginning was so so so slow. I listened to this on audio and read it in physical format because I wanted to read while driving. I kind of wish that I could have listened to the second half on the car ride because it was much more exciting, but such is life.

This book followed Kelsea who is now the Queen of the Tearling, as the title suggests. She has been living in solitude with her guardians for 19 years, and she’s taken away on her 19th birthday to become the Queen. She’s always known this was how it had to be, but she still wasn’t as prepared as she thought she should have been. Her mother was known for poor decisions, but Kelsea wasn’t told about her failures. She lived a sheltered life with lots of academic classes and always thrived in the stories she got to read from the fiction books in her house.

I really love the premise for this book, but I don’t think it was executed as well as it could have been. If I were to rate the first quarter of this book I probably would have given it a 2 stars, but by the end I was feeling 4 stars. I don’t know. There were quite a few issues about this book that I wasn’t fond of.

There was an instalove situation that pissed me off. So first off. Kelsea has never seen a large group of people in her life, so why the hell would she be able to be in love with someone. Also, how would she know how to flirt well? Umm. She wouldn’t. The only man she had ever been exposed to was Barty, her father figure. Hmm. I hate instalove, and I couldn’t appreciate the love because it felt so rushed.

I also didn’t like that there was so much unknown to the reader. I’m all for figuring out as you go, but I like when you know a little more than the characters know. I like being one step ahead, but it always felt as if you were dragging behind. Not a fan of that at all.

It was cool because by the end you got to see a little of the power with the sapphire necklaces, but you only got a taste, so you want more. Clever. I’m impressed with your miniature cliff hangers, Ms. Johansen.

Overall I think this was a good book. I’m interested to see what happens in the next ones. I definitely recommend audiobooks in general because I think I’ve fallen in love.