James Clyde and the Diamonds of Orchestra – Colm McElwain 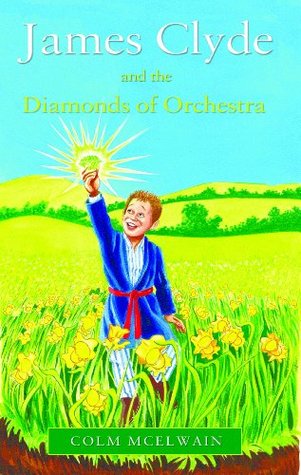 Title: James Clyde and the Diamonds of Orchestra

As an infant, James Clyde was deposited at a children’s home by his wounded, blood-soaked grandfather. As a result, he grows up under a cloud of mystery. Eleven years later when he hears about his strange past, he vows to uncover the truth. But before he can, his grandfather hands him a magical and mysterious diamond of Orchestra. With the aid of his friends, Ben and Mary Forester, James must protect the diamond from evil forces.

Soon, however, their lives are in grave danger. They are being hunted by a sinister man dressed in black and his blood-thirsty army. Outnumbered, James finds he must use the power of the diamond to escape their clutches – or become another victim of their murderous quest.

Huge thank you to Colm McElwain for sending me a copy of his book!

James Clyde finds out he is the ruler of the mysterious land called Orchestra. He has to find out how to save his people from the bad people of Darken. With his best friends he finds himself in a little bit of a predicament…

I think the idea for this book was quite cool, and it was a very fast read! I really enjoyed the relationships between the friends; I found them to be touching and fun to read. :)

I think something that turned me away from this book was the fact that it seemed very young. The writing seemed to be targeted towards a much younger audience, which I’m sure it was intended to be, but I didn’t seem invested in the story as much as I would have liked to be.

There were a lot of characters for such a short book. I felt confused by the character names throughout parts of this book, and wish there would have been a little more character development by the end. I enjoyed reading about the characters that were more explained.

The world was confusing, and I wish I had more information on James’ grandfather figure. He seemed like such an interesting man and it would have been nice to have a little background on him.

I also wanted to know more about the diamonds! I think it was such a cool idea, but I just felt like I didn’t know enough about them to fully understand the depth of the plot. There were three magical diamonds that controlled the world, but they weren’t explained.

Overall I found this to be enjoyable, but wish it would have had more description and a little more character development. I think that a younger reader would enjoy this more than I did.

Thanks again to Colm McElwain!