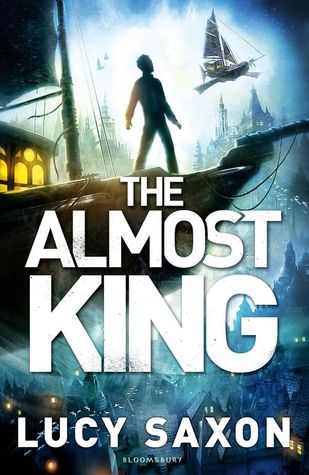 Aleks Vasin is the youngest of four brothers, each with his path mapped out. But Aleks doesn’t want to work in his father’s shop and live with his family in a village in the westernmost corner of Siberene. And when he hears his parents fretting about money, he decides to save them the cost of his keep and leave.

First he heads south – though everyone tells him not to – to Rudavin, headquarters of the kingsguard, and he signs up for the army, little knowing what brutality it entails. After only a few weeks, Aleks realizes that this garrison is full of liars and thieves; he’s signed away four years of his life to a commander who steals his money and a captain who’s already hurt Aleks’s beloved horse. This is not a noble destiny.

After a brutal beating, Aleks escapes, hoping to find safety and a new life somewhere in the north. And there, this deserter finds love, adventure, and a skyship in which he might just prove himself a hero after all – if he can evade the soldiers who seek to capture him.

Prepare for another sweeping adventure in this second book in a unique six-book series. Each book is set in a different land within the Tellus world, with repeating characters and related, nonlinear storylines that combine to create a one-of-a-kind, addictive reading experience.

OH MY GOODNESS. I loved this book so much. On Goodreads it says I’ve been reading it for a while, but I read this in one day. 410 pages in one single day. Seriously this series is becoming one of my favorite series!

This is the second installment in the six book series (SIX BOOKS!). In this book you follow Aleks Vasin down to the south of his country where he tries to find what he wants to do. He enlists in the army because no one in his family has, and having four successful older brothers, he needs to take a different path. He quickly finds out that this military camp in the south of the country is brutal and violent. There has never been a chance that he’ll get to fight the way he wants to coming from this camp. He wants to travel. He has wanderlust that he needs to fulfill.

“His father had never had the wanderlust he seemed to have developed. He’d always been happy exactly where he was, doing the same job, keeping his quiet life in their minuscule village. He’d never wondered what the cliffs in the East looked like, or whether the palaces were really as breathtaking as they were in the newscasts, of how it would feel to fly through a storm. Not like Aleks had.” (p 28)

I know that is a long quote, but I couldn’t help but share it. By page 28 of this book I had already related to Aleks on so many levels. I have wanderlust. I want to travel. I want to see the world, just like he does.

After he finds out that the military camp he’s at will get him nowhere, he leaves before he’s killed. He searches for his enlistment papers to destroy them, and finds something else. A journal. Mysterious knowledge for an awful event that takes place in book one. *the connections make my heart so happy* He takes his horse and runs away as fast as he can. He comes across good luck by finding people willing to house him for free. He gets to his “final” destination in the north where he is looking for a job in order to support himself, and stumbles across a run-down shop with gadgets created by the owner, Luka. He finds himself working at Luka’s shop every single day, and then a huge opportunity comes up…

Seriously this book was so amazing. I loved the romance in this story. It wasn’t rushed, which I find YA relationships often are, so I appreciated that. There was adventure. There was action. There was an element of mystery. This book had something for everyone. The friendships in this book just warmed my whole person up with happiness. SO GOOD.

This being the second book in this series, I don’t want to spoil anyone, but please just read these books. They’re not very popular, and I’ve never seen anyone review or talk about these books. The third book comes out in March, and I can’t wait to read it. Just give it a try! 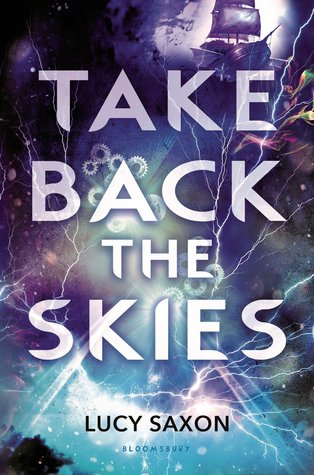 Title: Take Back the Skies (Tellus #1)

Catherine Hunter is the daughter of a senior government official on the island of Anglya. She’s one of the privileged – she has luxurious clothes, plenty to eat, and is protected from the Collections which have ravaged families throughout the land. But Catherine longs to escape the confines of her life, before her dad can marry her off to a government brat and trap her forever.

So Catherine becomes Cat, pretends to be a kid escaping the Collections, and stows away on the skyship Stormdancer. As they leave Anglya behind and brave the storms that fill the skies around the islands of Tellus, Cat’s world becomes more turbulent than she could ever have imagined, and dangerous secrets unravel her old life once and for all . . .

Holy goodness. Wow I have read some hecka good books lately. Maybe I just need to read some sci-fi more often! I LOVED this book. I flew through it, and I have no idea how it’s only a 3.47 stars on Goodreads.

Catherine, or Cat, escapes from her “perfect” government lifestyle in order to get away from an arranged marriage. Cat stows away on a skyship called Stormdancer and meets a crew that quickly becomes her new family. She hides in the wardrobe of a boy named Fox. They slowly become friends, and help out on the ship together. Cat and Fox help with some of the ship’s machinery, and help take from the rich and give to the poor. A little Robin Hood action going on. Cat learns something while she’s on the ship; the government of her society of Tellus have been lying. They’ve been lying for the past eight years. They’ve been taking children in order to create an army to help with the war effort. The war that hasn’t existed for eight whole years. Hmm. Cat, Fox, and the rest of the crew have to find out who is behind this mess, and avoid getting caught in the process.

I can’t recommend this book enough. Seriously, I loved it. This is a dystopian/sci-fi novel set in space. First off, it’s cool as it is, then you throw in an epic world, some awesome characters, a cute romance, and some action. It’s great.

Cat is such a strong main character, and I really loved reading her story. She runs away from home; she escapes from her abusive father and sick mother. She doesn’t want to leave her mom, but her mom tells her to run fast and far. So she does. She finds a new life and pretends to be a boy for a while so she’s not underestimated. Gosh she’s so cool. Then there’s Fox.

Oh my gosh he’s perfect. He has red hair and freckles, he’s strong, he’s a little older than Cat. His name is Fox. How cool. I thought it was ironic how they were both animal names, but that’s just me. Fox was just so cute, and you could tell he was reserved and didn’t want to talk about his past, but he trusted the crew and eventually Cat and it’s just so hecking cute.

THE ENDING. Oh my gosh. I’m pretty heartless when it comes to books, honestly. I don’t cry very often, so it didn’t surprise me when I didn’t cry, but I wanted to cry. My heart was so sad, but happy at the very end. Just… my heart is confused and I don’t know what to do with myself. So. I will read the second book almost immediately, then read the last book when it comes out in March.