The Simple Guide to a Minimalist Life – Leo Babauta 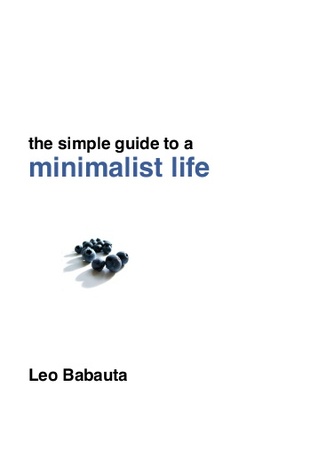 Title: The Simple Guide to a Minimalist Life

I liked the concept written about in this book, but I feel like nothing was talked about deep enough to have a lasting impact.

I love learning about other people’s recipes for minimalism; it’s refreshing and nice, but I didn’t really relate to this book that much, honestly. I think there were some amazing points, but again, not enough depth.

Formatting, I think this book was effective. I listened to it on audiobook, but each new section started with a quote from someone talking about living more simply. I think this was a nice touch, and gave some more context to the book as a whole. I didn’t enjoy how short the chapter were, though. I wish that it had been longer and had gone into more detail.

I think some of the stuff Leo talked about was a little too hardcore for this being a “simple guide” to minimalism. He was saying that in some aspects of your life, what you’re currently doing is wrong and you should do it his way. At least that’s how I interpreted it.

I think the best part of this book were the sections on finances. I am 19 and am just starting my “adult life.” My parents are amazing and are providing my education for me, but I’m at the PERFECT point in life to start thinking about how I’m spending the money I’m earning.

Too many people spend money they haven’t earned, to buy things they don’t want, to impress people they don’t like.

This was my favorite quote from the whole book, because it’s so true. My parents have always instilled in me to not leave beyond my means, and thats what this whole finance section was about. It’s so refreshing to read something in the EXACT way I’ve always thought about money. I don’t have a credit card, and don’t plan on getting one because my debit card will suffice. I don’t see it ending well for me to be given the opportunity to spend money I don’t have. I love this quote because it’s unbelievably true.

So many people have things that they don’t own. Be it financed cars, a super huge mortgage, thousands in student loan debt. A lot of people don’t own their things, and that’s something that honestly blows my mind. My parents have always been the ones to buy their cars by writing a check; they haven’t financed anything. They paid off their mortgage in a short amount of time. I’m so lucky to have grown up in an environment where actually owning your things has been a priority.

Overall, I enjoyed this book because I think there was plenty of information that was helpful and valid, but I wish it would have gone deeper into the ideas behind minimalism more.

Simple Matters: Living with Less and Ending Up with More – Erin Boyle 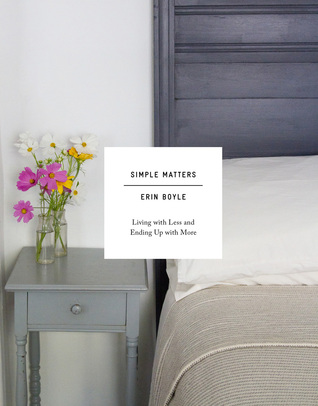 Title: Simple Matters: Living with Less and Ending Up with More

For anyone looking to declutter, organize, and simplify, author Erin Boyle shares practical guidance and personal insights on small-space living and conscious consumption. At once pragmatic and philosophical, Simple Matters is a nod to the growing consensus that living simply and purposefully is more sustainable not only for the environment, but for our own happiness and well-being, too. Boyle embraces the notion that “living small” is beneficial and accessible to us all—whether we’re renting a tiny apartment or purchasing a three-story house.

Filled with personal essays, projects, and helpful advice on how to be inventive and resourceful in a tight space, Simple Matters shows that living simply is about making do with less and ending up with more: more free time, more time with loved ones, more savings, and more things of beauty.

I loved reading this book and it REALLY inspired me to be more minimalistic with my home and wardrobe.

I think this was the perfect time for me to read this book. My mom read this and knew that I would love it, so she bullied me *lightly* into reading it. I’m just about to move into my first house away from home in August for my second year of college. I lived in the dorms the first year and there is only so much you can add to a dorm to make it your own… cohesively. Anyway, I think this is the most influential time for me to read this because it has so much to do with making your home your safe, happy, cozy place.

I have always had a mindset of minimalism, but haven’t really put that into action. I’m a collector of things, but recently I’ve become overwhelmed with the sheer quantity of items I own. I’ve purged and gotten rid of half my wardrobe, and still have an overflowing closet. I’ve vowed to not purchase any more books unless I know that they’re going to be favorites. I’m just ready to live more simply, and this book was so inspiring for that.

There were some pieces of advice throughout this book that really struck me.

Only keep a few items on surfaces around your space.

Use mason jars for dry goods that you can purchase from a bulk store.

Try and make some of your own beauty and cleaning products.

Move products from the original packaging *with labels* into glass containers.

I just loved this book and would recommend it to anyone who has felt overwhelmed by their things in their house. I’m ready to live a more simple and meaningful life with less.