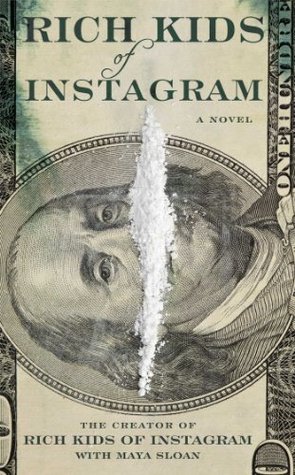 Based on the wildly popular blog “Rich Kids of Instagram,” a dishy and hilarious novel about the intersecting lives of the world’s most extravagant, unapologetically uber-rich teenagers.

The “Rich Kids of Instagram” are not your typical well-to-do brats. These “kids” drive Ferraris, fly to their weekend getaways in private jets, and post self-indulgent photos of themselves online as frequently—and as wantonly—as they blow wads of cash. Not to mention that they’re more involved in sex, drugs, and power plays than most people twice their age.

Drawing from the ten most frequent contributors to the popular blog of the same name—which receives an average of 850,000 unique visitors a month and has been featured on 20/20, The New York Times, The Washington Post, Forbes, The Atlantic, Buzzfeed, Gawker, and others—Rich Kids of Instagram revolves around a core group of spoiled young people, from a Southern Belle poultry-empire heiress to a media mogul’s driven daughter and an old-money rifle heir with a Mayflower legacy; to a nouveau riche outsider who is thrust into the members-only universe of the .1%, with scandalous results.

In a world that is smaller, more connected, and more competitive than ever, where nothing is off limits, some kids are just trying to make a buck—or ten thousand. Prepare to be wowed by this saucy, compulsively readable book about the hilarious display of extravagant wealth and the teenagers who have fallen into it.

This book starts out with Annalise Hoff. She has the job of planning a party for her dad. The one rule? Todd Evergreen needs to be there. Todd grew up with his mom and he had never seen a computer before the age of fifteen, but ended up creating a huge music label. this story is about the party that Annalise plans and a couple things after that. There was no storyline. It was the weirdest book I’ve ever read, it followed six “main” characters. It was like a diary that went back and forth in time. It only went through their stupid back stories. It was really dumb, honestly. Anyway, the characters meet each other 75-80% of the way through. Miller, or M.C. is dating both Desy and Annalise. Desy, or Desdemona Goldberd is a singer/dancer/actress. Cordelia Derby is a southern girl who works for a new fashion magazine. She’s Mr. Hoff’s assistant, and is a good-two-shoes. Phillip Atwater is a surfer who grew up with his adopted siblings, and Christian Rixen is from Denmark. Christian makes jewelry and comes to the United States to launch his business. I hated this book. I don’t hate that many books, but I almost didn’t finish it. This one was so bad. All this book talked about was sex and getting high from a numerous amount of drugs. I didn’t relate to any of the characters and was so uncomfortable while reading this.

The least horrible character was Cordelia Derby. She was preppy and cute, and I liked her until she had sex with a stranger that she claimed she loved. There was no reason for the sluttiness of the people in this book. Annalise Hoff wasn’t horrible except that the first chapter was about her rolling around naked with her boyfriend on an expensive Persian rug.

Ugh, okay. If I have to choose I supposed I’d choose Cordelia because she was the least offensive of the bunch. She edits a fashion magazine and she’s from some unknown southern state, and she always wears Lilly Pulitzer.