Last night I stayed up much too late to finish Talented (Talented #1) – Sophie Davis *review* and this morning I started We Were Liars – E. Lockhart. I will most likely finish this one this weekend. I got We Were Liars as an ARC from Random House from a website that was known as randombuzzers. They discontinued the website so you cannot use it any more, but I will still read this book and review it. It comes out on May 13, 2014. 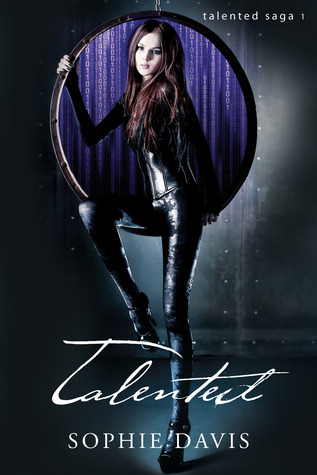 When Talia Lyons was just a child, her parents were murdered before her eyes. Offered a choice between accepting their fate and exacting revenge, Talia trains to become one of the country’s deadliest assassins in order to kill the man responsible for their deaths: Ian Crane. Luckily, Talia was born with a gift- the ability to read and influence the minds of others. At sixteen, Talia is poised to graduate from the McDonough School for the Talented, where she learned to control her abilities. Now there is only one obstacle standing between her and the retribution she craves… Talia herself.

Her greatest asset may also be her undoing; while a formidable weapon in the field, Talia’s talents prevent her from both shutting off the mental connection she shares with her questionable boyfriend and blocking out the thoughts of a beguiling fellow recruit. But Talia can’t afford to have the feelings and distractions of a normal teenage girl, when her life is far from normal.

She must regain the single-minded determination that has brought her this far, or it may cost Talia her life when she finally faces Crane. And even after being molded in to a weapon of war, she’ll still have to find the strength it takes to pull the trigger.

If James Bond and Sookie Stackhouse had a love child with a yearning for vengeance, her story would be TALENTED: an adventure about powerful teenagers who aren’t afraid to embrace their fears and fight for what they believe in.

I really enjoyed this book and I’m glad I got it from NetGalley. It’s a really cool concept that I’ve never read anything like. Talia is a Talented and she can read minds and control people, she’s a Hunter in training but she gets accepted into a group of two other Hunters. Henri and Erik are her team members and the three of them learn to have three-way mental messages and they go on super cool missions helping out the good guys in the future United States. It is one of the neatest books I’ve read in a long time and it kept me interested and engaged throughout the whole thing. I really suggest picking it up and reading it. I found that it’s free in the Barnes and Noble ebook store, so go download it!

I really enjoyed Talia, Henri, and Erik. Donavan irritated me from the very beginning and my suspicions were deemed correct. I really enjoyed the fact that there was a love triangle. I usually hate love triangles because the girl ends up picking the new guy instead of her old best friend, but this one was done really well. *applauds Sophie Davis* I actaully kind of liked that Henri was gay because it added diversity amongst the characters. Donavan just needs to stop… with himself… or life in general. Something needs to stop with him.

I would definitely be Talia because she has the coolest Talents. She can have mental conversations with people, that is seriously one of the coolest things ever. I really like that Talia is independent but still needs people in her life. There was a really good balance with that and I just enjoyed her overall. Erik. Erick, oh my goodness. Authors just need to stop with the perfect male characters. Erik is seriously perfection.

Because I had been participating in the #AReadAThon I read only Harry Potter from the 3-9 of this month. I plan to finish Harry Potter and the Goblet of Fire (Harry Potter #4) – J. K. Rowling soon and then I will be finishing Talented (Talented #1) – Sophie Davis which I requested from NetGalley. If I remarkably can finish both of those this weekend I will move on to We Were Liars – E. Lockhart. I got this ARC *advanced reader copy* from Random House Publishers in exchange for a review on this blog.