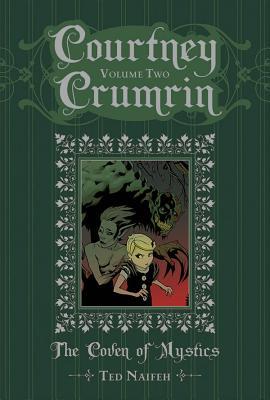 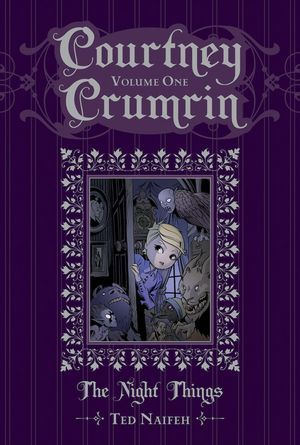 Fan-favorite and critical darling Courtney Crumrin is back in a series of newly remastered, full-color hardcover editions! Courtney’s parents have dragged her out to a high-to-do suburb to live with her creepy Great Uncle Aloysius in his spooky old house. She’s not only the new kid in school, but also discovers strange things lurking under her bed!

I went to my public library to do some studying for class and of course couldn’t leave without perusing the shelves… I wanted something fast and fun, so I chose this graphic novel. I thought the art style would be super cute and it looked a little creepy, so I decided to go for it, and I was not disappointed!

This graphic novel follows a girl named Courtney Crumrin moves into her great-uncle’s house with her parents in order to take care of him. Her parents are obsessed with the idea of moving up in society and being part of the popular crowd, so she starts to connect with her “creepy” uncle Aloysius instead of fostering a relationship with her parents. She now lives in the only creepy house in the whole neighborhood of rich mansions, so when she gets to school it’s hard for her to make friends. She finds out that her uncle has books about things she didn’t even know were real. Faeries, magic witches?! Who is her uncle?

This was just as cute as I had hoped it would be with just enough creepiness slipped in. I found this to be just what I needed because it was fast and easy to read. I have always been a fan of things that are a little creepy and spooky, so this was perfect for me. I loved the art style of this graphic novel because it focused on the cool colors. There were lots of purples and blues which made it seem quite eerie.

One thing that I don’t quite understand is the fact that Courtney doesn’t have a nose… Literally every other person in the book has a nose drawn on them, but Courtney has nothing. She’s a little Voldemort-esque…

Her parents annoy me to no end because they don’t seem to care about her. What is the point of even having a kid if you’re just going to ignore them and pretend they don’t exist? Ugh. Come on, having money is NOT that important in your life.

One of my favorite scenes was when Courtney went to see her uncle after she was having nightmares and couldn’t fall asleep. It was the first time that you saw an emotion from him and I thought it was really cute because he walked her back to her room. Aww. That’s so cute.

One thing that made me laugh was the fact that kids would randomly get eaten by things that were just chilling in the forest, but nothing gets said about them again. Like okay, this kid was just eaten by a monster, but no worries they’re probably fine…. Right.

I’m not really sure how old Courtney is supposed to be, but I would guess late middle school or early high school. She goes on a date, so I would assume she would be about 8th grade, maybe? I’m not sure, but I think any age would enjoy reading this graphic novel. I can’t wait to read the next three novels in this series because I already picked them up from my library :)

I THINK I’M GETTING OUT OF MY READING SLUMP YAYAYYAYAYAYY!